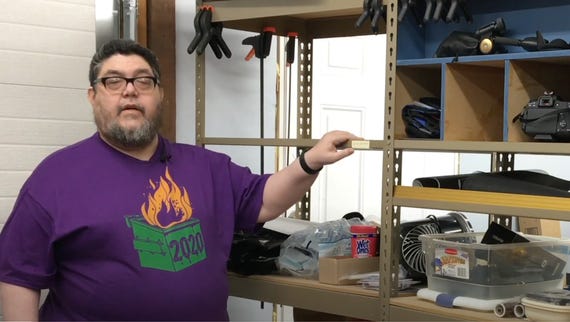 Welcome back to our series on practical prints for your 3D printer. While many love 3D printing because it lets them make really cool props and miniatures, 3D printing has many practical applications. I use 3D printing to solve problems and to fix things. Although I admire the artistic creations folks make with 3D printers, I don't even own model paints.

The best 3D printers If you're in the market for a 3D printer, you'll find one here that fits your needs.

A good place to start is a problem statement. What exactly do you need your 3D print to accomplish? In the case of the project shown in the attached video, I wanted to increase my workshop storage. Here's some background.

I have four metal shelving units here in the workshop, and I've had them for something like 20 years. Recently, I had a welder add wheels to them so that they can move around, and that's proven to be incredibly useful. Unfortunately, individual shelves are pretty far apart, which leaves a lot of space unused. There's a lot of dead space where I could very much use some more storage.

I decided I was going to 3D print supporting brackets for four plywood shelves to make it happen.

In the attached video, I show how I built these little support units in TinkerCAD and 3D printed them, and how they will support three-quarter-inch plywood shelves and give me more shelf space.

The unique design feature for this build is the captive nut built into the support bracket. Each bracket bolts onto the metal riser supports. Inside the bracket is a channel where a nut slides in. That nut is called a "captive" nut because once it slides in, it can't spin. That makes it easy to tighten the bolt on the outside of the shelf support.

I used TinkerCAD to design this up. TinkerCAD has its limits, but it's very easy to use and for simple designs, very fast to work with. The key feature I used to create the captive nut channel and the tunnel for the bolt is called a "hole" in TinkerCAD parlance.

Any TinkerCAD object (either a basic object or a group) can be turned into a hole. In fact, a click of a button switches an object from a solid to a hole and back again. The hole is, essentially, negative space. If you intersect a solid with a hole and then group them, the area of the hole is subtracted from the solid space.

I first created a negative spatial representation of the nut by sizing a polygon to a size a bit larger than my real-world nut. I made it a bit larger to allow the nut to slide in the channel easily. As the attached video shows, by duplicating the negative space nut (the "nut hole," if you will), I was able to create a channel that allowed the physical nut to slide into the middle of the bracket.

I used a cylinder turned into a hole to cut out the tunnel where the bolt slides into the bracket.

I also needed to create a rounded corner to my bracket, so it would fit in the rolled steel elbow of the shelf uprights. While most 3D modeling tools have a fillet tool, which takes an edge and rounds it over, TinkerCAD does not. While this annoys me to no end, sometimes you have to work around the problem.

As the attached video shows, I made my own rounded corner by creating a cylinder and grouping it with some rectangles, making up a new solid object that has a hard-won fillet on one side.

As it turns out, I wound up creating both left and right brackets, to accommodate attaching them to left and right uprights. I also made some brackets slightly taller, so they would push the shelf up high enough to provide space for some bins I have.

Printing the brackets and building the shelves

I bought a 4 foot by 4-foot sheet of 3/4 inch plywood. There's a short but exciting montage of me using power tools to cut the plywood into shelves. While you've seen me use the miter saw and the sander before, this is the first time you've seen me use my new table saw.

I had to wait three months to get it this summer because it seems table saws are hard to get in the pandemic. I guess a lot of people are working at home and fixing things up, and also contractors are being invited inside a lot less, so many more of us are doing our own home fixes without outside help.

And, with that, I've just added another 18 square feet of storage into the workshop. That'll make a big difference.

This project demonstrates how you can combine 3D printing and some basic woodworking to optimize your storage in new and helpful ways. Stay tuned for more practical prints.

And what about you? Have you made useful things with your 3D printer? If so, let us know in the comments below.