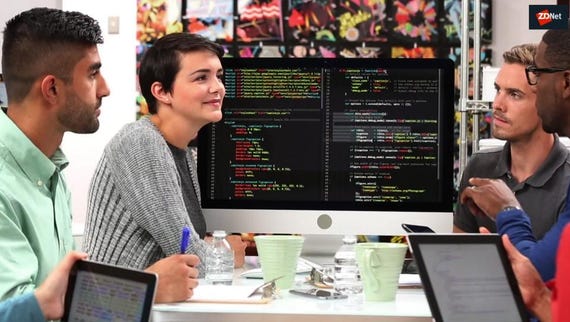 Programming language Rust has entered the top 20 of the Tiobe popularity index for the first time, but it's still five spots behind systems programming rival Go.

There's growing interest in the use of memory-safe Rust for systems programming to build major platforms, in particular at Microsoft, which is exploring it for Windows and Azure with the goal of wiping out memory bugs in code written in C and C++. Amazon Web Services is also using Rust for performance-sensitive components in Lambda, EC2, and S3.

Rust has seen its ranking rise considerably on Tiobe, from 38 last year to 20 today. Tiobe's index is based on searches for a language on major search engines, so it doesn't mean more people are using Rust, but it shows that more developers are searching for information about the language.

Rust was voted for the fifth year straight the most-loved programming language by developers in Stack Overflow's 2020 survey. This year, 86% of developers said they are keen to use Rust, but just 5% actually use it for programming.

On the other hand, it could become more widely used thanks to Microsoft's public preview of its Rust library for the Windows Runtime (WinRT), which makes it easier for developers to write Windows, cross-platform apps and drivers in Rust.

Paul Jansen, CEO of Tiobe software, said Rust's rise is because it's a systems programming language that is "done right".

"All the verbose programming and sharp edges of other languages are solved by Rust while being statically strongly typed. Its type system prevents run-time null pointer exceptions and memory management is calculated compile-time," said Jansen.

"So no garbage collection that suddenly kicks in. We have D, Lua and Julia trying to beat C and C++, but Rust seems to be the first one to come really close."

However, Rust demands dedication to learn. Microsoft Azure developers initially were less productive in Rust than Go, but spent less time in the end debugging and manually checking for bugs that Go would have let pass through.

The Rust project's 2020 developer survey found users struggle to adopt the language due to its steep learning curve and because few companies use it. Google excluded Rust for its new Fuchsia OS because very few developers are familiar with it.

Developers are also increasingly looking at memory-safe Go for systems programming, with the language being used to build platforms at Google, Netflix, Salesforce, IBM and Twitter. Go rose on Tiobe from 15 a year ago to 12 today.

A recent survey of over 16,000 developers found Go is the most sought-after language. And both Rust and Go are associated with salaries over $120,000 in the US, according to Stack Overflow's survey.

Also new on Tiobe's top 20 is Scratch, the visual programming language developed by MIT Media Lab for teaching children how to program. Scratch is one option for beginners to learn programming on the Raspberry Pi. Scratch rose from 26 to 18 on Tiobe's index, but its highest ranking was 14 in 2017.

The statistical programming language R rose from 22 to 9, almost reaching its top-ever ranking of 8 in 2018.

Curiously, Microsoft's TypeScript is only ranked 44 on Tiobe's index. Developer analyst RedMonk, which bases its rankings on GitHub and Stack Overflow data, placed TypeScript at 9 in its latest rankings.

TypeScript adoption is being driven by the huge amount of existing JavaScript code out there. It's also hugely popular with developers, second only to Rust in Stack Overflow's 2020 survey and just ahead of Python.