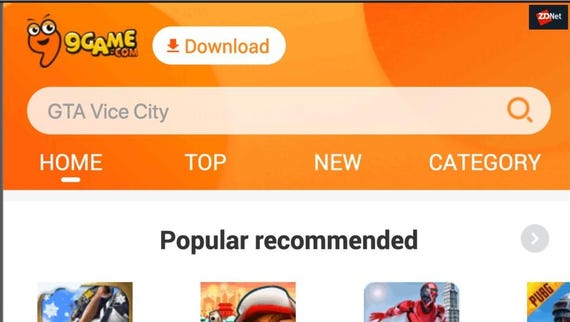 This is the most dangerous mobile app store
Watch Now

9Game.com, a portal for downloading free Android games, was identified as the mobile app store hosting the most malicious apps in 2019.

According to RiskIQ's 2019 Mobile App Threat Landscape report, 61,669 new malicious apps were uploaded on 9Game in 2019.

In this ranking, 9Game was followed at a considerable distance by the official Android app store -- the Google Play Store -- with 25,647 new malicious apps. Completing the top 5 are Qihoo 360's Zhushou store, feral apps (a term used to describe apps published outside of any app store, usually on web pages or forums), and Huawei's Vmall app store.

But while the Play Store ranked second on the list of new malware uploads, its sheer size diluted the impact these malicious apps had on Android users.

The Play Store didn't rank at all in the top 5 app stores with the highest concentration of malicious apps, which included (1) 9Game, (2) the feral apps, (3) the Vmall app store, (4) the Xiaomi app store, and (5) Qihoo 360's Zhushou store.

One notable absence on this list is Apple's App Store. This is a direct result of Apple's in-depth and individual app review process, which is more suited to catching malicious apps than the automated process employed by most other app stores.

"Meanwhile, Google's security controls are improving despite allowing troublesome apps to enter the Play Store at a rate it finds acceptable-the number of blacklisted apps in the Play store dropped an impressive 76.4% in 2019," the security firm added.

Most new apps appear in China

The downward trend is surprising, RiskIQ experts said, as there are now more apps than ever. The company said it observed 8.9 million new apps uploaded on app stores globally in 2019, 18% more than in 2018, when it detected 7.5 million new apps.

RiskIQ says that most of these new apps (both clean and malicious) are coming from Chinese developers.

Join Discussion for: Report identifies the most dangerous mobile...