The bioluminescent fauna may one day be bright enough to light up a street or workplace.
Written by Charlie Osborne, Contributing Writer on Dec. 14, 2017 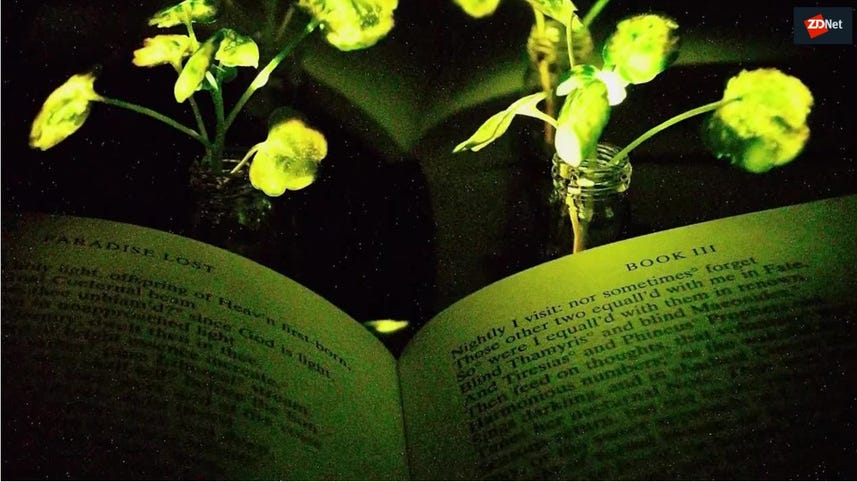 We may have some rather stylish lamps on the market, but one day, we may be able to replace our reading light with plants.

Glowing plants, powerful and bright enough to replace anything from street lamps to office lighting, are the goal of a team of researchers.

Engineers from the Massachusetts Institute of Technology (MIT) have taken a "critical first step" towards making natural, glowing plants a viable reality through embedding watercress plant leaves with specialized nanoparticles.

The experimental watercress plants are able to give off a "dim" light for almost four hours at the moment, but it is hoped that one day, these kinds of plants -- and other species -- will be bright enough to replace our lighting solutions.

"The vision is to make a plant that will function as a desk lamp -- a lamp that you don't have to plug in," says Michael Strano, the Carbon P. Dubbs Professor of Chemical Engineering at MIT and senior author of the study. "The light is ultimately powered by the energy metabolism of the plant itself."

In order to create the glowing plants, the MIT engineers used luciferase, an enzyme which traditionally gives fireflies their glowing abilities. The enzyme acts on a molecule called luciferin which produces the light, alongside another molecule called co-enzyme A.

Each of these particles was then packed into carriers which balanced light and potential toxicity, submerged in a solution and then exposed to high pressure to push the particles into entering leaves through stomata pores.

The team hopes to refine this process enough in the future to create a paint or spray based on luciferase to give plants lighting capabilities.

So far, the technique has been successfully tested on watercress, arugula, kale, and spinach.

According to the researchers behind the study, the technology could be used to provide low-intensity indoor lighting. In addition, trees embedded with the particles could one day eradicate the need for street lamps altogether.

If the study comes to such fruition, the glowing plants could be useful in reducing our carbon footprint and power demands in cities worldwide -- pegged at 20 percent of worldwide energy usage -- as well as look rather spectacular.

The team specializes in what is now called plant nanobionics and have previously designed plants able to detect explosives and monitor drought conditions.

"Plants can self-repair, they have their own energy, and they are already adapted to the outdoor environment," Strano says. "We think this is an idea whose time has come. It's a perfect problem for plant nanobionics."

The study was funded by the US Department of Energy and appears in the academic journal Nano Letters.

Welcome back, sneakernet: Why net neutrality repeal will drive us to the edge

San Francisco bans delivery robots in most of the city

Feeling burned by Airbnb and Uber, legislators here are taking a stand: "Not every innovation is all that great for society," says the city supervisor.