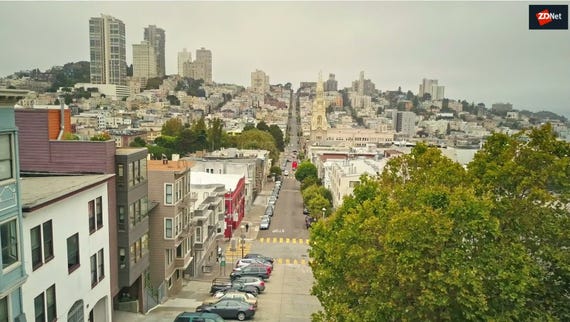 This is how Google drones will deliver your packages, and keep your pets safe Drones could be a threat to pets and powerlines, so Google has come up with a new robot to help.

In the latest turn in the long-running saga between tech companies and San Francisco's municipal legislators, the city has voted to ban delivery robots on most of its sidewalks and severely restrict their use in areas where permitted.

The new rules are the strictest in the nation and a departure from the approach of states like Idaho, where new rules actively encourage robot delivery. Proponents say delivery robots relieve congestion and reduce accidents on city roads. But some pedestrians in San Francisco have complained that they crowd sidewalks and present a hazard to humans.

Autonomous delivery robots began toting food to waiting customers in San Francisco earlier this year after a company called Marble partnered with Yelp Eat 24 to test its flagship delivery bot. The four-wheeled robot is the size of an office copy machine.

The Marble/Yelp trial was confined to select San Francisco neighborhoods. The robots, which run autonomously but are monitored by a human at Marble in real-time, were also accompanied by human chaperones during testing.

In May, about a month after Marble's first bot rolled down the sidewalk, San Francisco Supervisor Norman Yee proposed a ban on the use of the technology in the city, citing public safety concerns.

"I resolutely believe that our sidewalks should be prioritized for humans," he told the San Francisco Examiner. "We do not allow bicycles and Segways on our sidewalks." (Segways were banned on city sidewalks in 2002, an action criticized as heavy-handed at the time.)

When Yee realized he didn't have the necessary votes, he amended his proposal, replacing the ban with strict limitations. Under the new proposal, companies with robots under development (there are quite a few in San Francisco) would be able to apply for a limited number of permits, and tests would only be allowed in areas of the city with industrial zoning.

Yee, who said his office is full of photos and written complaints sent in from angry pedestrians, received support from local activists. "Sidewalks, I believe, are not playgrounds for the new remote controlled toys of the clever to make money and eliminate jobs," said Lorraine Petty, an activist with the community group Senior and Disability Action, at the hearing for Yee's proposed rules. "They're for us to walk."

Last week, the Board of Supervisors voted unanimously to pass the new rules after a snippy exchange between legislators and proponents of the technology. "Not every innovation is all that great for society," said Yee at the hearing. Some of the bad feelings may be explained by the city's strained relationship with Google, Airbnb, and Uber.

"When it comes to being proactive about the development of commonsense regulations for commuter shuttles or the sharing economy, such as Airbnb or Uber," Yee said at a meeting in October, "somehow we have sent the signal that it is acceptable to act now and ask for forgiveness later."

The new rules, which are confined to delivery robots and don't affect other autonomous machines, such as robot security guards, limit permitted devices to three miles per hour and require human operators to stay within 30 feet during testing. Even in permitted areas, devices may only operate on sidewalks that are six-feet wide.

Other robot delivery companies affected by the new rules include Starship Technologies and Dispatch.ai. Companies that offer delivery by drone, such as Flirtey, aren't affected, although existing FAA rules strongly limit commercial drone use in the US.

Why AI may save your life

The rise of machine intelligence is often associated with the downfall of humanity, but analysis of clinical data is improving outcomes. That's making doctors more informed, not more redundant, for now.

A new report from Deloitte says the tipping point for the technology has arrived.

Join Discussion for: San Francisco bans delivery robots in most...