The study suggests that agreeable people had more smartphone activity on the weekends.
Written by Campbell Kwan, Contributor on July 23, 2019 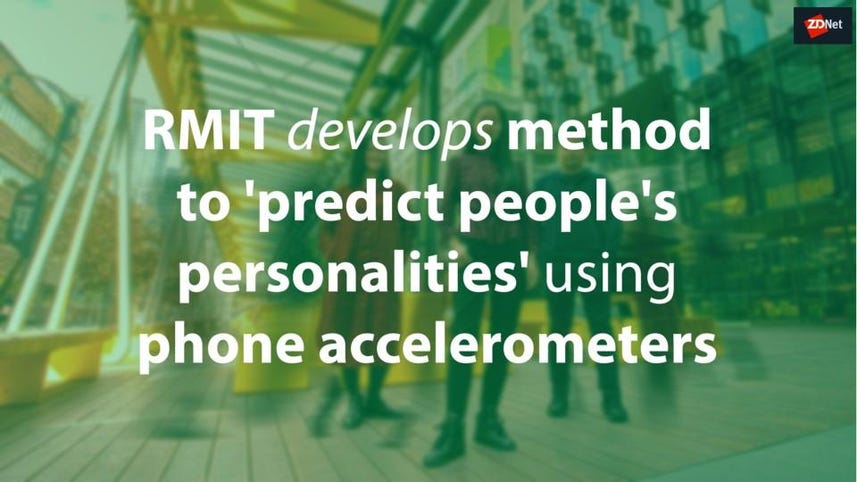 Researchers at the Royal Melbourne Institute of Technology (RMIT) claim that they have developed a new method to predict people's personalities through using a mobile phone accelerometer.

As part of the study, test participants based at a US research university completed a personality survey underpinned by the Big-Five personality framework -- which analyses the traits of extraversion, agreeableness, conscientiousness, neuroticism, and openness -- with each participant being given a score regarding their traits.

The participants were then each given an Android device with software that periodically collected data such as call and text message frequency, in addition to physical activity data inferred from accelerometers.

The data collected was then analysed in correlation with the participants' personality surveys to determine if there were any trends or patterns that arose.

"We assumed that we can predict human personality by studying participants' phone activity and physical activity intensity," the study said.

According to the study, people with consistent movements on weekday evenings were generally more introverted, while extroverts displayed more random patterns.

The study also found that agreeable people -- a trait that sees an individual value getting along with others and having an optimistic view of human nature -- had more random activity patterns and were busier on weekends and weekday evenings than others.

While conscientious, organised people didn't tend to contact the same person often in a short space of time.

"There are applications for this technology in social media with friend recommendations, online dating matches, and targeted advertising, but I think the most exciting part is what we can learn about ourselves," lead study author and RMIT PhD student Nan Gao said.

"Many of our habits and behaviours are unconscious but, when analysed, they tell us a lot about who we really are."

The study results come a fortnight after Facebook was fined $5 billion for tracking and harvesting users' data in the Cambridge Analytica scandal. During the scandal, over 50 million Facebook users -- many of which access the social network through their smartphones -- had their profiles harvested and were then provide targeted content that allegedly influenced the 2016 US election.

It was also reported around the same time that China's border guards install surveillance apps on the phones of some visitors as part of the government's ever-increasing mass surveillance regime in the Xinjiang province, indicating that the tracking of smartphone activity is a growing privacy concern around the world.

In Europe, regulators recently announced an antitrust probe into Amazon's use of sensitive consumer data from the independent retailers that sell on its marketplace. Meanwhile, Google is currently under consideration for a €1.49 billion fine for allegedly partaking in targeted advertising practices that breached EU antitrust rules.

The course will cover the fundamentals of cybersecurity and offer students a professional pathway to working in technology.

Researchers find that both iOS and Android apps have insecure data storage - and that could lead to passwords, financial information user locations and other personal data being accessed by cyber attackers.

RMIT in collaboration with ISAE-Supaéro has created a bio-inspired drone that flaps its wings and rides wind currents like birds.