Farmers are working with robots, data analysts, and IT professionals to create a "Plantopia" for growing fresh food. A new indoor vertical farm in Cincinnati is a prototype designed to prove that fully-automated indoor farming is not only safer, but also profitable.
Written by Kelly McSweeney, Contributing Editor on Oct. 19, 2018 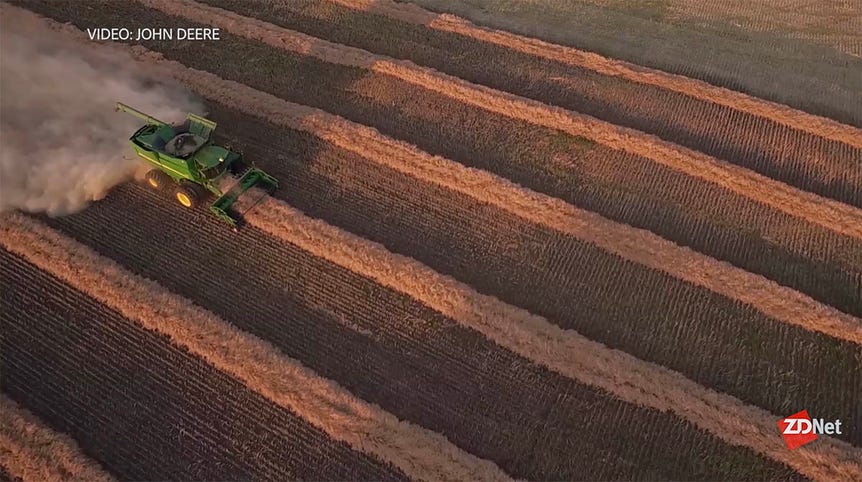 Robots could turn a basic concept of farming on its head. What if, instead of growing crops in rows spread across many acres of land, food could be grown in vertical columns? A Cincinnati-based firm called 80 Acres Farms is testing this concept and seeking to prove that automated indoor farming can be safer and more profitable than traditional methods.

Indoor farming controls environmental factors so that crops such as lettuce can be grown anywhere, anytime, making fresh food available year-round, regardless of location. A traditional farm might have three seasons, but Hamilton's new indoor farm is expected to turn over leafy greens every three weeks. This perpetual growing requires constant labor, but robots are doing the heavy lifting so that the farmers can focus on plant health and nutrition.

Haders explained, "A study published in Food Chemistry (Oct 2017) found mature spinach lost about 80 percent of its vitamin C after three days of storage, while baby spinach lost 25 to 45 percent. In another study, in the Journal of Food Science (May 2006), packaged spinach lost nearly half its folate, one of the B vitamins, after eight days of refrigeration."

Also: Why learning to code won't save you from losing your job to a robot TechRepublic

The benefits are clear, but vertical farms could pose a safety hazard to workers because they have to get on a scissor lift to get to the plants to inspect and harvest them. The robotic system, however, eliminates this safety hazard by using patented technology to reach the highest levels so that humans don't have to.

Robots reach greater heights and use vision technology to identify ripeness and potential disease on the plants, but since 80 acres is starting with leafy greens, humans are still picking and inspecting the fragile plants. Sensors collect information, but ultimately the human farmers use their expertise to grow the healthiest possible crops.

While they might still occasionally get their hands dirty, these farmers also input data on their smartphones and spend time looking at computers away from the fields. In fact, the farm employs a data scientist and a group of IT professionals to help make find trends in the data and keep the automation running. While it might seem a bit impersonal to reduce the human touch from farming, a closed environment is better for food safety because crops are less likely to be contaminated with bacteria such as Listeria, Salmonella, or E. coli.

Haders said, "Food safety has been a big part of our culture here. If you don't have to walk into the grow zones as often because it's all being monitored then you're going to cut your risk [of an outbreak]."

Contrary to conventional wisdom, plants don't actually need sunshine and rain to grow; they need light and water, and automation ensures that they get precisely the right amount of each.

"Plants thrive in an indoor environment," Haders said. "We create, what we call a 'Plantopia' -- a perfect environment tailored to each crop variety's nefeds. The spectrum of light used in our farm optimizes photosynthesis, our plants are growing up to three times faster than in the field. We also grow using 97 percent less water than outdoor farms, no pesticide use, not contributing to runoff or over application of nutrients. We are nearly diminishing food miles; our produce only travels 50 miles versus 2,000. It's the cleanest way to grow our food."