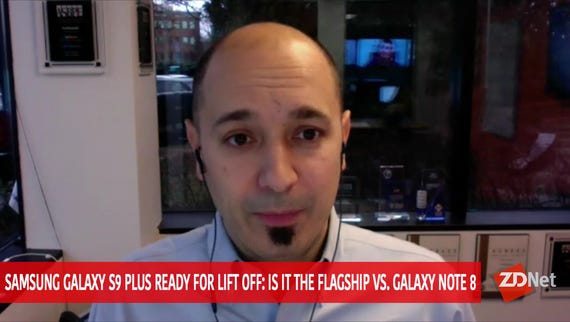 Samsung Galaxy S9 Plus ready for lift off: Is it the flagship vs. Galaxy Note 8
Watch Now

Video: Samsung Galaxy S9 Plus ready for lift off: Is it the flagship vs Note 8

The new Samsung Galaxy S9 and Galaxy S9 Plus offer improvements over the Note 8 with the cameras, stereo speakers, processor, and some software enhancements. As ZDNet's Larry Dignan pointed out, the new Galaxy S9 creates some flagship confusion -- with the S Pen and Snapdragon 845 appearing to be the primary differences.

Read also: Samsung Galaxy S9 Plus first impressions: Improving upon the S8 Plus just where it was needed

The S Pen may be one of the only differentiators, but it is the primary reason that Note fans continue to purchase the Note devices. If you love your S Pen, then don't worry, as some of what we see in the new Galaxy S9 is coming soon to the Note 8 through the Android 8 Oreo update. These improvements in Android 8 on a Samsung Galaxy Note 8 include:

There will be many other software enhancements that come with Android 8 Oreo. The update is just starting to roll out to Samsung Galaxy S8 devices, so the Note 8 shouldn't be far behind.

It's a bit sad that it takes Samsung so long to update its devices to the newest version of Android, but at least Note 8 owners won't have to wait as long as Galaxy S8 and Galaxy S8 Plus users. To be honest, though, much of what is provided by Samsung out of the box is included later by Google in the next version of Android, so Samsung Galaxy owners are not missing out on as much as you may be led to believe.

Then again, if you don't use the S Pen much, then you may want to consider the Galaxy S9 or Galaxy S9 Plus. I used each for a couple of hours, and they are very good smartphones with the capability to excel in the enterprise. The Galaxy foundation, including the microSD card slot, headphone jack, fast wireless charging, Samsung Pay, iris scanner, Knox security, and more are all present in the Galaxy S9 devices.

Here's a look at the best Galaxy S9 cases, alongside official and third-party accessories like wireless chargers. Samsung's Galaxy S9 and Galaxy S9 Plus release is March 16.

Samsung Galaxy S9 Plus review: Android perfection has been achieved