Samsung touts orders will be delivered within 3 minutes of leaving the dispatch centre.
Written by Aimee Chanthadavong on March 23, 2021 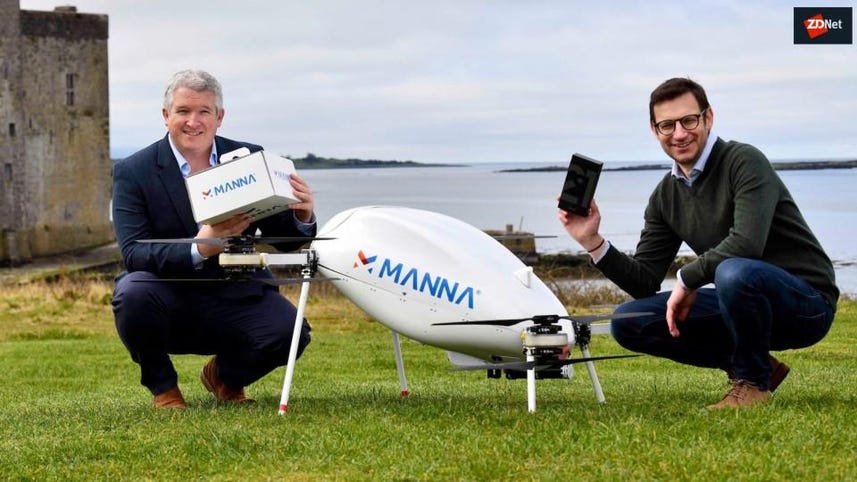 Samsung Electronics has partnered with drone company Manna to facilitate a contactless delivery service for its Irish customers.

Samsung customers who purchase from the latest range of Galaxy devices -- including the S21 Ultra, the Galaxy Buds Pro, the Galaxy Tab S7, the Galaxy Watch 3, and its recently launched Galaxy A Series -- via the company's online store in Ireland will have their order delivered using a Manna drone under the new service.

The service, a first for Samsung globally, will initially be available to customers in Oranmore, Samsung said, noting there are plans to expand the service nationwide "in the future".

Samsung Ireland head of online Eamonn Grant touted the use of these drones, which travel at speeds of over 60kph and at altitudes of 50-80 metres, would enable deliveries to be made to homes in Oranmore within 3 minutes of leaving the dispatch centre.

"Superior customer experience is at the heart of what we do and with this new service we are embracing what we believe will be the future of retail. In the current environment, there is no better time to provide a contactless alternative to 'click and collect' and we are really thrilled to be partnering Manna to achieve this," he said.

The town of Oranmore has been benefitting from drone deliveries since September when Tesco announced it was partnering with Manna on a six-month trial to deliver on-demand small baskets to customers within 30 minutes to an hour of ordering their groceries.

Similar drone delivery pilots are running in other parts of the world, including in the US by Walmart and Amazon, and Australia by TerryWhite Chemmart.

Apps, drone deliveries and AI: How technology stepped up its game to fight COVID-19

A new report highlights the benefits, but also the shortcomings, of data-informed technologies and AI in the response to the COVID-19 crisis.

The trial is aimed at reducing approval processing times so drones can be up in the air sooner.