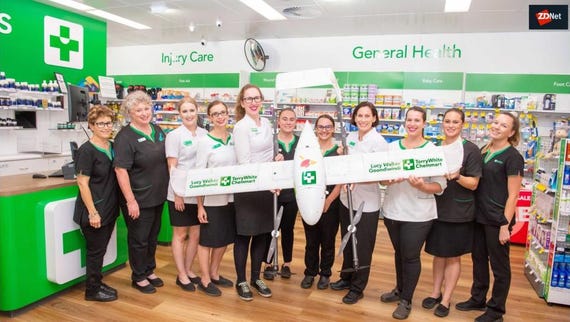 The trial, which remains subject to regulatory approval, will take place in the Queensland town of Goondiwindi. Swoop Aero's drone network will deliver medication within a 130-kilometre range of the town from the local TerryWhite Chemmart pharmacy to residents who typically have to travel up to three hours to reach the pharmacy.

"The drone will fly in and out of a central point in Goondiwindi with the flight path fully automated and approved by CASA [Australia's aviation regulator], deliver the customers products, then return to base ready for its next job. After a little training, it is very easy to operate," Swoop Aero CEO Eric Peck said.

The drones will be operated remotely from Swoop Aero's headquarters in Melbourne. Each drone, according to the company, can reach speeds of up to 115 kilometres per hour and withstand extreme weather conditions including 50 kilometres per hour winds and heavy rain.

"Our aircraft do not have on board cameras filming in flight, but are instead guided by a three-tiered communications system consisting of mobile internet, satellite communications, and data link," Peck said.

"Not only is this a very convenient option for the delivery of medicines for those living outside of ready access to their pharmacy but, as we saw during the terrible bushfires in Australia last summer, there were cases where road access to some homes and towns was completely shut off," he said.

"To have a drone to provide deliveries of medicines could be of critical importance in situations where accessibility is limited."

The trial is off the back of existing work Swoop has been doing in Malawi, the Democratic Republic of the Congo, Mozambique, and Vanuatu, where it provides medical supplies including vaccines for malaria and tuberculosis, penicillin, anti-malarial and anti-venom medications, and HIV/AIDS testing kits from healthcare centres to remote villages. On the return trip, the drones are also often carrying tests for tuberculosis and other blood samples.

Speaking to ZDNet last March, Peck had hinted at ideas that the company wanted to provide healthcare to rural and remote parts of Australia, especially in Indigenous communities.

At the time, Peck also expressed that Swoop Aero was exploring the use of its platform to support the delivery of the COVID-19 vaccine.

Earlier this month, a similar announcement was made by the Northern Territory government, iMove Cooperative Research Centre, and Charles Darwin University. The group revealed plans to trial the use of drones for delivering healthcare services to remote communities across the state.

The project, to be funded by all three parties, will initially investigate the logistical challenges of using drone technology to deliver health services in NT, including integrating drones into the current health transport infrastructure network, procuring airframes capable of withstanding the territory's wet and dry seasons, and developing drones with a maximum range of 250 kilometres.