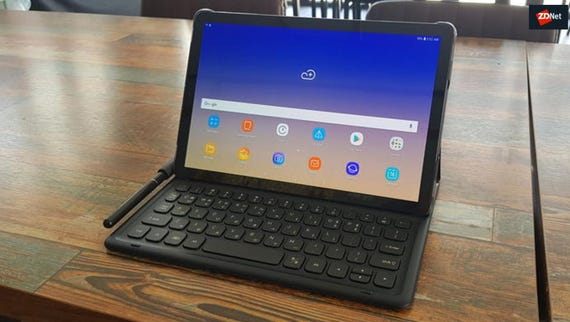 Samsung has unveiled the 2019 edition of its high-end convertible, the Notebook 9 Pen.

Aimed at creative professionals, it offers a new and improved built-in S Pen that works on a device that can be used as a laptop or tablet.

The 2-in-1 is available with a 13-inch or 15-inch full HD LCD screens, both of which come with a dark-blue aluminum finish, 16GB of RAM, 512GB of storage, and Intel's 8th generation Core i7 processors. The 15-inch model is a new option for the Notebook Pen.

They also sport a backlit keyboard and feature facial and fingerprint recognition. Samsung will show them off at CES in January and plans to release them later in the year.

A key difference between the two models is that the 15-inch option comes with Nvidia GeForce MX150 (2GB) discrete graphics.

Like Samsung's 2018 Notebook Pen, the S Pen slides out of a slot on the front. However, the new S Pen is gold-colored rather than silver and is designed to work exactly as it makes contact with the display bringing significantly reduced latency, according to Samsung.

Unlike the Galaxy Note 9's similar Bluetooth S Pen, this one doesn't require charging. Users can also choose between three pen tips to optimize the feel when drawing.

CNET's review of last year's Notebook Pen rated the up to nine-hour battery life as "merely OK", but Samsung is promising the device's 54Wh battery will deliver a 15-hour battery life, aided by fast charging.

The notebook features two Thunderbolt 3 ports for charging, a USB-C port, a combined audio and mic jack, and a microSD card slot.

CES 2018 is more about AI, 5G, gadgets and transportation, but it's worth checking out the wares from laptop makers. Common themes: Thin is in and so is Alexa integration.