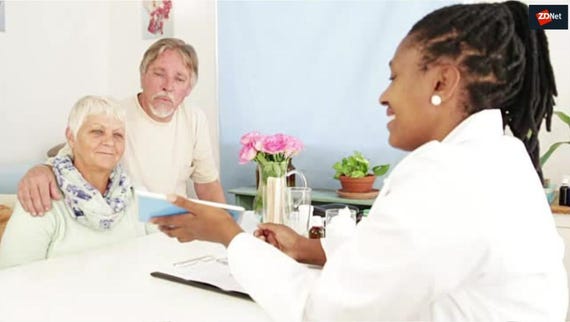 What is digital health and how will you benefit?
Watch Now

While hospitals and doctors' offices are slowly adopting new health hardware, consumers are being encouraged to improve their lifestyles and do more of the work of self-care themselves — with smartphones and smartwatches at the heart of that vision.

"One of the best ways to engage consumers [with health] is to use tools that they use every day, and people use smartphones, TVs, their home appliances every day," Dr David Rhew, chief medical officer at Samsung and VP of its B2B healthcare division, tells ZDNet.

While connected-home tech may one day play a role in ensuring the health of its users, for now the tech giants are looking towards smartwatches as the lynchpins of their health strategies. Samsung's Galaxy Watch Active, released at its Unpacked event in February, is one example of the company's growing interest in measuring health. It comes with My BP Lab, an app designed to tell you how your blood pressure is doing.

Samsung is hardly alone in levelling up its health offerings: Apple added an ECG (EKG if you're in the US) to its Apple Watch recently. While Apple's Watch looks to detect atrial fibrillation (AF), a condition that affects 3 in 100 people and is a risk factor for stroke, Samsung is looking for high blood pressure. Having a raised blood pressure affects nearly one in four adults, and is a risk factor for stroke, heart disease, and many other life-threatening conditions.

Like atrial fibrillation, many people who have the condition don't know it, but unlike AF, most people with high blood pressure can take measures to counter the condition without help from a medical professional.

There aren't many details on how the app will work or its accuracy level, so it's difficult to predict what level of impact it will have (blood pressure has been regarded as difficult to measure outside of a medical context). However, it's been developed with the University of San Francisco, and users can sign up to join a research project run by two organisations, which will help users monitor not only their blood pressure but their stress levels, too.

For both Apple and Samsung's users, strapping on a smartwatch could mean receiving a potentially life-changing diagnosis without support for what their condition means, and even without medical followup. In the rush to create new features, have tech companies abandoned their users to their diagnoses?

"Creating technology is so important, but the next step is now the appropriate use of the technology, and that will require a collaborative effort, not just by technology providers but with all stakeholders," Rhew says.

Samsung is working on guidelines with medical organisations for what should happen next.

The changes to smartwatches' direction and marketing — from wellness nice-to-have to health monitor — are part of a wider trend in health hardware. The growth in chronic diseases, an ageing population, and spiralling medical costs are all pushing healthcare providers and insurers alike to turn to technology.

While consumers may see the burden of public health increasingly shifting to their personal devices, Samsung is looking even further out, where social care may be delivered by consumer technology in our homes as well.  At this year's CES, Samsung debuted a range of service robots including Bot Care — a concept device that could not only help out with everyday household tasks, but monitor health as well.

"There is a need to address the issues beyond traditional health that will also impact health," says Rhew, such as loneliness and social isolation.

While many companies are looking to digital health and wellness tech, few are explicitly looking at social care, even if it's currently at a conceptual stage for Samsung. Yet health and social care problems are intimately linked: a senior in a badly equipped home environment without proper social care will find themselves bouncing back to hospital time and again; elderly people with lots of health problems will need higher levels of social care, and risk losing their independence.

"I think these are complicated problems but we're starting to chip away at these issues that individuals have, and by focusing on ways we can address some of those barriers and challenges and improve the functional status of these individuals, we'll be able to address some of the broader issues like loneliness and social isolation, such as the ability to live independently and be highly functional, and stay out of the hospital," he says.

By transforming smartwatches and wearables into health-monitoring devices, the big technology companies are also hoping to transform the way such hardware is paid for: instead of consumers handing over a one off payment for a new bit of kit, insurers and healthcare providers could subsidise the cost for their customers, in return for cutting their own costs when those users keep up healthy behaviours or need fewer visits to the emergency department. Considering the relatively anaemic take up of smart watches thus far, plugging into the healthcare system could be just the shot in the arm the tech vendors are looking for.

"The end user of a lot of these technologies will no longer be the employees, but will be the patients, consumers, and members of certain plans and programs. Is the payment model going to be pure B2C? Unlikely. What we're seeing in the US is there are so many stakeholders whose ultimate goal is to improve the quality and reduce the cost of care and… this is not just an important thing to do, but something that is economically important for businesses," says Rhew

Samsung is doubling down on the hardware side of the healthcare tech equation, partnering with other hardware companies, including the likes of irisVision, which makes a novel wearable for people with the eye condition macular degeneration, and MobileHelp, which makes a smartwatch medical alert system. The companies take elements of Samsung tech, and build their own solutions on top.

Samsung is also working with healthcare organisations themselves to research the potential impact of the diverse strands of healthcare technology. "One of most important things that we really have to show is are these devices and these solutions actually resulting in the impact that we believe they could? Are they resulting in improved quality, are we seeing reduced costs and improved access, is this something that is scalable? We've spent a lot of time talking about the great value but we need to prove it in some cases," Rhew says.

An Australian collaboration is working on a less surgically invasive system to restore sight to people with retinitis pigmentosum.

Apple has been gradually building out its health strategy; here's what it looks like right now.

It's hard to show why we actually need 5G in our phones right now, much as everyone in the mobile industry is trying.