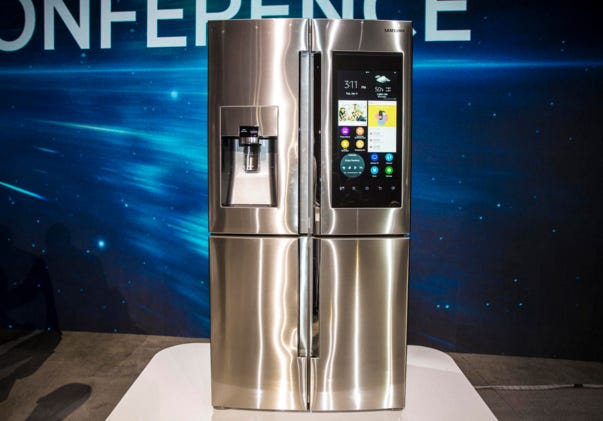 Tech companies want to intrude on every part of your life.

The true aim is for tech companies to become every part of your life, of course.

Still, they try to take it step by step in the hope that they move reasonably fast without breaking too many essential things.

Samsung's latest idea to capture hearts and minds -- especially hearts -- may, though, be a step too far.

It pretends to be a public service. You see, Valentine's Day is approaching and you're a mess in the romance department.

You've tried. Both your friends have even set you up on dates. But you're still spending too many nights gaming alone.

You sign up, you arrange to meet in a restaurant refrigerator and you see if you and your date can just chill.

No, that's not quite right. Instead, as CNET reports, the idea is to take a photograph of your fridge's innards and see if they lift the hearts of others who have also exposed their one carton of curdled milk and their 17 bottles of beer.

Samsung says this is all about meeting "under more honest or transparent circumstances."

It's clear that Samsung is to romance what Einstein was to hair styling.

Try it out in real life. Because, you know, real life is where you actually have to commune with others.

Walk into a bar, sit down, espy a member of your target sex and open with the line: "Hi. May I tell you about the contents of my fridge?"

I'm sure that'll go down as well as your curdled milk.

Meeting people is hard. Their faces are buried in their phones. Their souls have been captured by Facebook, YouTube and the rest.

But you still have to believe that a digital connection may not be indicative of anything at all. Real relationships are based on quaint ideas such as looking at a real person's face in real life, seeing how they smile, sensing how they smell and observing whether they sneak glances at their phones every two minutes.

Then again, Samsung says the Refrigerdating app is an antidote to the patent falsity of dating apps.

Few of the pictures on the likes of Tinder are real representations of the actual person. Quite a few of the people behind the pictures aren't actually real, either.

I fear, though, this is only the latest step toward a swift Apocalypse.

One can only imagine what sort of dating apps will follow when Samsung releases a smart bed, a smart wardrobe or a smart sink.

Or, of course, a smart toilet.