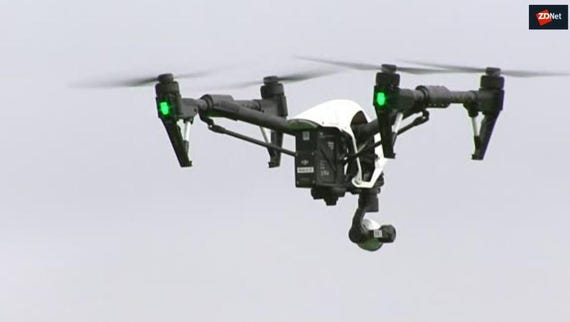 Should police need a warrant to collect evidence via drones? That question is currently before lawmakers in Indiana as they consider a bill to wipe out current prohibitions on drone use by police without first procuring a warrant.

In North Dakota, a 2015 law not only makes it legal for police to use aerial drones for surveillance, but also to equip drones with nondeadly weapons such as tasers.

Nonetheless, opponents draw a line in the sky when it comes to drones, which are much easier and cheaper to deploy for surveillance than helicopters, and which aren't subject to the same strict rules governing flight. A helicopter can't easily hover outside a window, for instance.

In 2013, Seattle famously reversed course and withdrew plans to equip local police with drones amid escalating protests. The California senate passed a bill that would have required police to secure a warrant for drone surveillance in 2014, but that bill was vetoed by then-Governor Jerry Brown, leaving the door open for police to use drones without warrants.

That's just what a SWAT team in Campbell, California, did earlier this month, deploying a new drone called the US-1 from Impossible Aerospace during a standoff with a suspect at a local Denny's. According to authorities, the drone, which is equipped with thermal and optical sensors and has a 90 minute battery life, provided perimeter surveillance and a view of the roof and exits.

In that case, police ended up using tear gas to force the suspect out of hiding. The drone's sensors were able to confirm that an open kitchen vent was leaking some of the gas, prompting the SWAT team to alter their strategy to keep law enforcement safe. The standoff resulted in a peaceful arrest.

Impossible Aerospace, the company behind the drone, just procured $9.4 million in a Series A for its long-flying drones, which are crammed with battery cells that are distributed throughout the airframe. The company is specifically vying for lucrative government contracts in public safety, including police and firefighters.

"It's the unique capabilities of the US-1 that led our team to the arrest of the suspect, and kept our community safe," said Gary Berg, Police Captain in Campbell.

Operational use of drones is one thing, but privacy advocates worry that blanket mandates for drone use open the door to more insidious snooping by the state. That's motivating critics to voice opposition to the pending Indiana bill.

"It may sound like it's a reasonable use of technology to have a drone over a public street," Stan Wruble, a criminal defense attorney in South Bend, told a local ABC News affiliate. "However, over a public street you can obviously look into people's backyards, you can look into people's garage areas and if you have a reasonable expectation of privacy in those areas, this sort of turns into the big brother Orwellian nightmare scenario."

For now, the question is being settled on the local level, but it's clear that drone use by law enforcement is gaining popularity. Worldwide, the market for public safety drones is expected to grow to $1.15 billion by 2022.