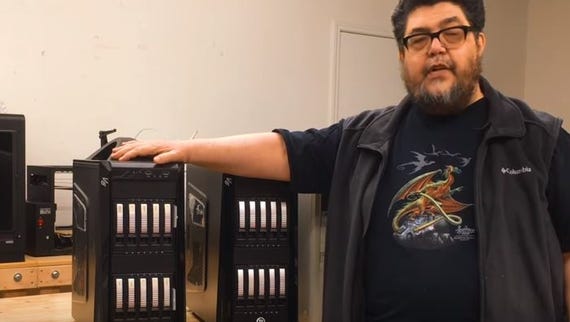 NAS: Should you build or buy?
Watch Now

The Evolution of Enterprise Storage How to plan, manage, and optimize enterprise storage to keep up with the data deluge.

Let's get one thing out of the way. If you're a person who always builds your own PCs or servers, this article isn't for you. If you're the sort who would always build your own NAS, go ahead. I'm not telling you not to.

Instead, this article is for the person who's really trying to understand the trade-offs, to decide what the best course of action is based on cost, effort, and other factors. If you're on the fence or just learning about how to manage your own storage array, read on.

I'll be honest. At this point, I've lost track of how much storage I have here in my home office. I'll tell you it's somewhere north of 150 terabytes, probably closer to 200 by now. Because of the kinds of work projects I've had to do over the years, I've always needed a lot of storage.

Until about five years or so ago, I always built my own. That process culminated in the media tank builds I did in the mid-2000s. These two machines each had ten drive bays, along with one boot drive. One tank was for live data, and the other kept backups of the primary server.

At that time, it was difficult to get a desktop size (or desktop budget) NAS that would hold as many drives as I needed to run. One machine had ten 1TB drives, while the second had ten 2TB drives.

Building them was fun, but challenging and a bit annoying. The big effort was sourcing all the parts. At the time, it was relatively easy to hang up to six drives off of one motherboard, but adding another five required some add-on boards. Making it easy to remove and swap the drives required two five-bay drive trays. I found some nice cases that had space for all the bays, but I had to do some cutting, drilling, and bashing to make it all fit.

Once everything worked, I had to set up the file sharing system (which was originally based on XP, then Windows 8, and then, finally, Linux). All in all, it was fun. But more importantly, I had the storage array I needed within the budget I could spend.

But then came the age of appliance NAS devices, like the Drobo and Synology machines. When it came time to add more storage, I decided to move to my first Drobo array. Setup was a cinch. Over time, I wound up purchasing four Drobos, both direct-attached and networked. I found that the ease of setup and the ease of maintenance was incredibly compelling, especially since I was so busy.

Eventually, the hand-made NAS boxes, the big tanks, got relegated to offline backup storage. By the time we moved to Oregon in the fall, those tanks had been offline for a few years and I realized it was time to take them permanently out of service.

Over the course of 2017, I had a chance to look at seven desktop NAS devices, including the Drobos and the best-in-show Synology machines, and it became abundantly clear that the era of incredibly capable and cost-effective appliance NAS devices is here.

At this point, I can't recommend building your own NAS unless you have a unique requirement that's just not met by an appliance NAS. However, as my review series showed, you can find an appliance NAS with just about any feature you could possibly want, including direct output to a TV, if you happened to want such a thing.

I recently tried to price similar components to what I was running in my home-built NAS boxes and came up with about $750. That's not all that much of a savings over the appliance devices, especially if you factor in not only your time, but the energy costs of a bigger tower machine. The Synology DS1817+ costs only $850, with everything set up, configured, and ready to run.

Today, really, the only reason I'd really recommend you go out and build your own NAS is for the experience and fun of putting one together. That's still a very valid reason, especially if you want to gain familiarity with the technology and NAS server software.

But if you simply want to get and setup reliable storage, I'd recommend that you buy it. It will save you a ton of time, won't cost you much more, and the devices now on the market, particularly the Synology devices running Disk Station Manager, are exceptional. I have no plans to ever build another NAS.

As for the two big media tank tower machines, they've been donated to a good cause.

Join Discussion for: Should you build your own NAS, or buy one?