What with the weirdest Presidential election in my lifetime going on it's easy to imagine important public policy events going unnoticed. One of them is that the Obama administration is moving closer to surrendering the US government's stewardship of the Internet's numbering and naming systems.

To put it bluntly, I don't understand why we would do this. The only changes it could bring are bad ones. Once our authority over the parties administering core Internet infrastructure is gone, ultimate political control over it is gone. I think this is a bad thing. The US has done an admirable job of supervising the development of the Internet and there's no evidence that it has ever exerted untoward influence over the processes. I like the idea that the administrative bodies are clearly accountable to some clearly independent body.

We all know now that the Internet began as a US government project. Administration of parts of it was eventually outsourced, first to Network Solutions Inc and then to a non-profit corporation created just for the task: ICANN (the Internet Corporation for Assigned Names and Numbers). ICANN operates autonomously, but under a contract from the US government, specifically from the NTIA (National Telecommunications and Information Administration) in the US Department of Commerce.

In early March Lawrence E. Strickling, Assistant Secretary for Communications and Information and NTIA Administrator, reiterated the Obama administration's commitment to transfer their authority over the IANA, the part of ICANN which controls the numbering system, to "the global multistakeholder community." The community he names, in the form of the IANA Stewardship Transition Coordination Group (ICG), has delivered to the NTIA a formal proposal for the transition. Strickling says that the NTIA will be reviewing the proposal to make sure it meets their requirements, some of which are pure bureaucratic blather and some uncontroversial niceties.

This particular agreement deals only with the numbering system, not naming. Naming, in the form of control of the DNS root zone, is run by Verisign under a separate agreement with the NTIA, in cooperation with ICANN. But the administration has also announced their intention to surrender that authority.

The NTIA is much more directly involved in the DNS administration process (see image below). All changes to the root zone, the root-servers.net zone, and the root hints file must be approved by the NTIA acting as Root Zone Administrator. 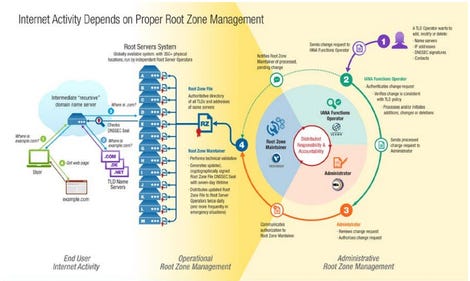 The processes shown in the diagram have been significantly modernized in recent years, and public input is always sought when changes are proposed.

The NTIA function as Root Zone Administrator is just an extra check and so Verisign's proposal is simply to remove it. As a test, parallel authentication processes would be run for a time and compared for consistency. If there are none for some agreed period of time , success is declared and the new system goes hot.

This leaves ICANN and Verisign as the authoritative bodies controlling the DNS. A new agreement would be needed between ICANN and Verisign or, theoretically, whatever other body ICANN and the vaunted global multistakeholder community choose to operate as Root Zone Maintainer. No such agreement has yet been revealed.

Who is the "global multistakeholder community" to which the NTIA refers? It's basically the same shifty technocracy that has been running ICANN for a while, the one that makes gobs of money for themselves by creating top-level domains like .christmas and .florist. To replace the NTIA oversight functions they will create new entities, all part of ICANN. In other words, ICANN will police itself. The supervisory bodies will, in theory, have the ability to change operators for the numbering or naming systems, but I'm skeptical.

There are potential legal problems with the proposed transition. See section 539(a) of the "Consolidated Appropriations Act, 2016" (i.e. the Federal budget), which forbids funds from being used "to relinquish the responsibility of the National Telecommunications and Information Administration, during fiscal year 2016..."

Then there's Article IV, Section 3 of the US Constitution: "The Congress shall have Power to dispose of and make all needful Rules and Regulations respecting the Territory or other Property belonging to the United States." Is the NTIA's authority over the naming and numbering systems on the Internet "Property belonging to the United States?" To my mind, obviously yes. It's certainly valuable and there are plenty of parties who would pay a lot of money to have it.

But I'm not a lawyer. Internet law scholar and retired law professor David Post, blogging at the Volokh Conspiracy, disagrees with me, basically arguing that this authority is not "property" in any relevant sense. Obviously there is more than one way to look at this.

Many of you non-Americans are wondering why the US gets such authority. Easy. We made the Internet. We've made sure that it could be as free and open as it is. Don't like it? Call your congressman. It's a good thing that the US government and not (oh, for example) the United Nations, has been in charge. The plan is not to put them in charge, but once clear authority is gone, who knows where it will end up.

There's still time to stop this. Make a stink.

Join Discussion for: Stop the Obama administration from surrendering...