It also confirmed that the Tegra 4 ARM Surface 2 and the Intel Haswell Core i5 Surface Pro 2 will go on sale on 22 October in 22 countries, including 15 in Europe.

Elsewhere on the continent, in France, the ARM-based Surface 2 starts at €439 for the 32GB model while the Pro starts at €879. 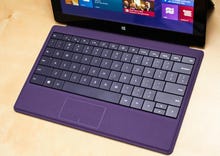 As well as boosting the specs for the second generation Surfaces, Microsoft has also tackled the issue of distribution — the Achilles heal of the original Surfaes.

Europeans, even in smaller countries like Finland, Belgium and Sweden, will get the Surface 2 tablets at the same time as the US though at  slightly higher p rices.

In the case of the original Surfaces, Europeans had to wait nearly four months longer than the US for Surface RT, which arrived in February 2013 in many smaller European markets , missing the Christmas sale period . The Pro meanwhile  arrived in in Europe in May 2013 .

Join Discussion for: Surface 2 launch: Where to get the cheapest...