Neither of these phones will win any spec sheet battles, but when looking at them, just keep whispering 'under AU$400' to yourself.
Written by Chris Duckett on Sept. 16, 2021 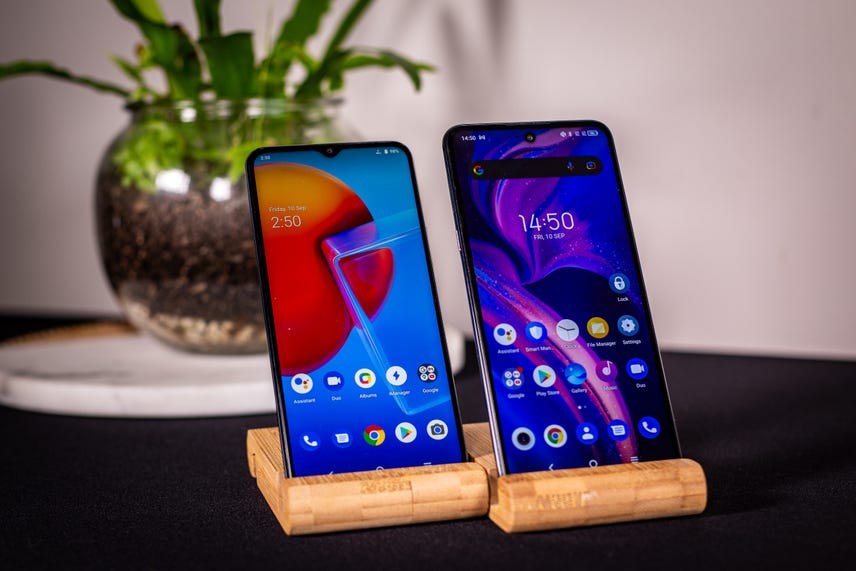 If you are looking to purchase a phone in Australia for under AU$400, you are entering a very competitive space. Phone makers try to balance specs against cost, market share against returns, and sometimes a handset from the mid-tier might appear on special at this level.

The TCL 20L+ is a phone approaching 7 inches with a Snapdragon 662, 6GB of memory, 256GB of storage expandable via micro SD, four rear cameras, and 5,000mAh battery. It's hardly a head-turner, in fact, it sounds quite standard and boring.

At similar levels of excitement is the Vivo Y52 5G, which is a 6.5-inch phone with a Dimensity 700 chip, 4GB of memory, 128GB of storage expandable via micro SD, three rear cameras, and 5,000mAh battery.

As the name suggests, the Y52 has 5G connectivity, and the TCL phone does not. If that is all you care about, and I'm not sure why you would before millimetre wave spectrum is available, then it is an easy decision to make between these phones. However in my testing, I couldn't get a reliable 5G signal, but that could simply be an issue with the towers around me during lockdown, but a Pixel 5 was able to get a signal reliably.

For everyone else, it's about weighing up the tradeoffs made.

The 20L+ has double the storage at 256GB and more memory, which sounds good, but the Y52 uses a Dimensity 700 that positively smokes the Snapdragon 662 inside the 20L+. Usually, the difference is not terribly noticeable, but on compute-heavy tasks like processing night mode photos, the TCL will churn.

Both phones can be dual SIM, have a headphone jack, a fingerprint sensor in the proper place, and a version of Android 11 with a skin applied -- for the 20L+ this is called TCL UI, while the Y52 has FunTouch OS.

TCL has a few software extras thrown in, which really do not help its case. In one instance, it applies automatic smoothing on its gallery app, and the end result is a loss of definition. It wasn't until I happened to open a certain image in Google Photos that I realised the camera wasn't misbehaving and TCL thought it was helping.

When it comes to physical materials, on the front, the TCL has a hole-punch front camera and sparkly back, while the Vivo uses a teardrop-style notch, and has a plastic fingerprint magnet on its back.

It's also worth mentioning one gimmick the 20L+ has up its sleeve. TCL claims its display uses technology that makes it possible to have a good viewing experience while wearing sunglasses.

When it first landed on my desk, I was impressed by the feature. Then weeks later I tried it out again, and despite trying with multiple pairs of sunglasses, including polarised and prescription, I could not replicate the experience for the life of me. If this reliably worked, it would be a winner, but I cannot tell the difference between either phone's display when the brightness is turned up. I suspect the phone I was comparing it to initially had its brightness turned down while the new 20L+ was blazing away on full. This feature is therefore probably more wishful thinking than anything else.

In a perfect world, there would be a device that has the chip and connectivity of the Vivo, but the cameras, memory, and storage of the TCL. But that world doesn't exist -- this world is about trading off and deciding what is important.

Does the better camera make up for a low processor and annoying software, or is some form of 5G connectivity enough to get the Vivo over the line?

It's a hard tie to break, but I think the Vivo just gets over the line, simply because TCL's NXTVision actively makes photos unrealistic, minimises its better camera, and if you don't realise it is on, then you'll accept an inferior experience, whereas the Vivo always has a not-great camera.

But then again, both phones are under AU$400, so you cannot go too wrong either way.

Home & Office
McDonald's and Chick-fil-A both have a big problem. Only one has a solution