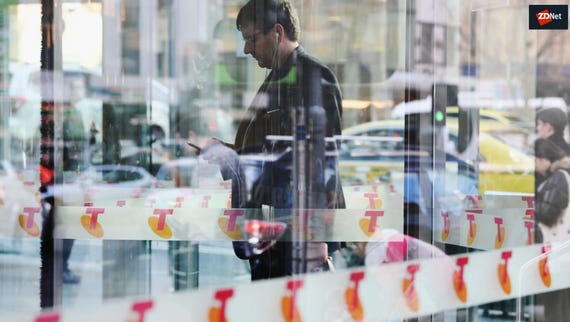 Telstra has said it will be installing 400 metres of cabling along the Geelong rail tunnel in an effort to provide in-train mobile coverage under the Victorian government's AU$18 million Regional Rail Connectivity Project (RRCP).

Two "highly directional" antennas will additionally be placed on the entrances of the tunnel, Telstra said, with all work to be carried out during non-peak travel times beginning next month and expected to be complete by the end of June.

"Telstra's mobile network covers most of the Geelong line already. Today we are announcing that we will improve coverage for commuters inside the newer V/Line carriages," Telstra COO Robyn Denholm said on Monday.

"Our participation in this project highlights our ongoing commitment to investing in regional Australia."

"The train driver needs to radio the train controller before departure. The radio communicates via the Telstra network and therefore the driver was unable to complete a radio test which is a safety requirement," the company tweeted in explanation of why a telco outage meant a train could not run.

The Victorian government had last month said its RRCP has already provided around a quarter of the Vlocity train fleet with mobile signal boosters while 35 new mobile towers are being built along the train lines.

According to Telstra, Victoria is the first Australian state to make use of in-train signal-repeater technology from carriers.

The V/Line Vlocity trains will continue being fitted with the boosters each week until all are connected by the end of 2018. According to the state government, the project will deliver an additional AU$20 million per year to its economy.

The Victorian government had announced the RRCP last year, saying it would partner with Telstra, Optus, and Vodafone Australia to build towers and install reception repeaters on trains, enhancing the signal from mobile towers along the train lines.

At the time, Vodafone said it would be building 23 of the 35 new mobile towers.

Optus then signed a AU$16 million co-funding deal with Victoria in October to build out an additional 25 mobile towers in regional areas to provide around 5,000 premises with mobile coverage by the end of 2019.

Optus said it provided a "majority" of the AU$16 million co-investment, with VP of Regulatory and Public Affairs Andrew Sheridan at the time saying the announcement was an extension of Optus' AU$1 billion commitment to provide coverage to regional areas of the country.

The 25 sites were selected through consultation with the state government.

According to the Victorian government, the Optus agreement was reached as a result of its state largely missing out on winning any sites in the third round of the federal government's mobile blackspots program, with Victoria withdrawing its AU$11 million commitment to the federal program in January following the perceived slight.

Earlier this month, the state government also used its 2018-19 Budget to pledge AU$11 million for a second round of its own mobile blackspots program, which is expected to facilitate 45 new mobile base stations.

The Department of Communications this week revealed that one telco is currently powering 40 mobile blackspot base stations with diesel generators, while another is fond of free-range battery storage.

Accusing the government of a AU$14 million underspend on round three of the mobile blackspots program, Labor has said the Coalition must accept ANAO's recommendations on Budget night.