Tesla's CEO Elon Musk shocked both the technology and automobile industries when it announced that it was going to open-source its electric car patents.  Can open-source cars be far behind?

Not many people outside of the car industry know it, but open source and Linux have long been under automotive hoods. Indeed, last year I predicted that  2014 would be the year of the Linux car .

The Automotive Grade Linux (AGL) organization, a Linux Foundation sub-group, is providing a common operating system and application programming interfaces (APIs) for car information and entertainment (infotainment) systems. Simultaneously, and in partnership with AGL, the non-profit automotive industry GenIVI Alliance is driving adoption of an In-Vehicle Infotainment (IVI) open-source development platform. These are active groups: Their members will be meeting next in early July at the Automotive Linux Summit in Tokyo.

So while some in  Detroit may not "get" open-source or what to make of Tesla's newly free patents , open-source savvy car companies such as Jaguar Land Rover, BMW, GM, Peugeot Citroën, Renault, and Toyota are another matter. These companies already know that working together with open source makes perfect business sense. 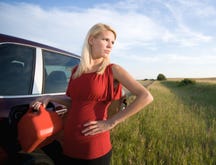 As Jim Zemlin, executive director at Linux Foundation, told me in an e-mail interview, "Elon Musk gets a key fact that Linus Torvalds got 23 years ago: By opening up and kickstarting collaboration, you can enable much greater innovation to quickly solve complex problems.

Patents — just like proprietary software — introduces friction that stifles innovation in fast- moving markets. Musk and Tesla just eliminated a major speed bump on the path to the wide spread use of electric cars. Open collaboration — especially without the threat of patent wars — is the fastest way to solve complex problems that can benefit all of mankind."

What Tesla brings to the racetrack isn't just driver electronics. By opening its patents, the company is giving its competitors "a path to the creation of compelling electric vehicles." Musk wrote that at first he thought Tesla was "compelled to create patents out of concern that the big car companies would copy our technology and then use their massive manufacturing, sales and marketing power to overwhelm Tesla. We couldn’t have been more wrong. The unfortunate reality is the opposite: electric car programs (or programs for any vehicle that doesn’t burn hydrocarbons) at the major manufacturers are small to non-existent, constituting an average of far less than 1 percent of their total vehicle sales."

Therefore, "Our true competition is not the small trickle of non-Tesla electric cars being produced, but rather the enormous flood of gasoline cars pouring out of the world’s factories every day." So, to benefit not only Tesla, but other companies making electric cars, and indeed the oil-starved world, Tesla is open-sourcing its full patent portfolio.

Andrew Updegrove, a founding partner of Gesmer Updegrove, a top intellectual property and technology law firm, thinks Tesla's move is "very forward thinking and commendable action that follows on two already existing trends: the prevalence of Linux and other open-source software already embedded throughout vehicles today, and a practice going back a decade whereby companies such as IBM, Oracle, Motorola and Nokia all made non-assertion commitments with regard to open source software involving, in the aggregate, thousands of patents."

Daniel Ravicher, executive director of the Public Patent Foundation (PUBPAT), a patent reform organization, also applauds the move. "The concept shows intellectual maturity on the role of patents in their business. It's absolutely the right thing to do, and shows courage that they're willing to do it."

Still, Ravicher wonders, "exactly what the licensing terms are" for these patents.

He's not the only one. Keith Bergelt, CEO of the Open Invention Network (OIN) — a defensive patent organization for Linux, said he's "encouraged by the Tesla announcement and is eager to learn precisely the scope and breadth of their patent pledge. As a complement to whatever pledge Tesla makes regarding its patents, we would also hope that Tesla would fully embrace patent non-aggression across the entire Linux system by joining the almost 1,000 member strong OIN licensee community."

While we wait for the legal details, I will also observe that, regardless of how you feel about open-sourcing patents, this seems to be a smart business move. It will raise the popularity level of electric cars in general and, in so doing, it will also raise Tesla's position as the leading electric car manufacturer.