The two motoring giants will each separately invest in Argo AI to deliver autonomous vehicles in the US and Europe.
Written by Aimee Chanthadavong on July 14, 2019 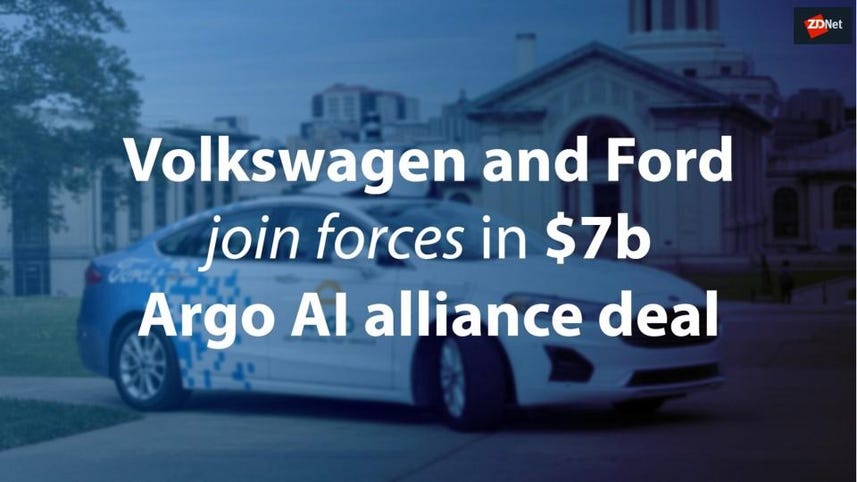 Ford Motor Company and Volkswagen have joined forces to invest approximately $7 billion in autonomous vehicle platform Argo AI, a move that will give each car manufacturer the chance to independently integrate the company's self-driving system into their own vehicles that will be rolled out in the US and Europe.

As part of the Volkswagen-Ford global alliance, where the two companies will remain as separate owners, Volkswagen will invest a total of $2.6 billion in Argo AI. Of that, $1 billion will come as direct funding, while another $1.6 billion will be contributed toward using its Autonomous Intelligent Driving (AID) company.

According to Volkswagen, it will give Argo AI access to more than 200 of its employees, most of whom have been developing Volkswagen Group's self-driving technology. The Munich-based AID office will also become Argo AI's new European headquarters to be led by AID's current CEO Karlheinz Wurm

In addition, the German car manufacturer said it will purchase $500 million worth of Argo Shares from Ford over three years.

Ford added it will invest the remaining $600 million of its previously announced $1 billion investment in Argo AI.

While the deal is still subject to regulatory approvals and closing conditions, it will mean – once approved – Ford and Volkswagen will hold major equal share in Argo AI.

"While Ford and Volkswagen remain independent and fiercely competitive in the marketplace, teaming up and working with Argo AI on this important technology allows us to deliver unmatched capability, scale and geographic reach," Ford president and CEO Jim Hackett said.

As part of the joint investments, Ford will have to access to Volkswagen's electronic vehicle architecture and modular electronic toolkit (MEB), which it said, will be used to deliver more than 600,000 zero-emission vehicles over six years in Europe from 2023.

The collaborative alliance comes as both Ford and Volkswagen have each run their own sets of autonomous vehicle trials.

Last October, Ford partnered with Baidu to kick off a two-year trial initiative to get autonomous vehicles on Chinese roads, following efforts by Ford engineers to equip the vehicles with Baidu's Apollo Driver System.

Similarly, Volkswagen teamed up with Aurora Innovation to bring the reality of self-driving technology to life and realise its vision of "mobility for all at a push of a button".

IoT and cloud computing: AWS and Volkswagen have a grand plan to connect up factories

Industrial Internet of Things and cloud project will link up 30,000 sites and 1,500 suppliers.

Microsoft and BMW: We can help you build a smart factory with the cloud, robots, and IoT

The Open Manufacturing Platform will offer use cases and an 'open technology framework' built on Azure.

Auto companies want to become more like software companies, but this isn't a matter of hiring a few engineers.