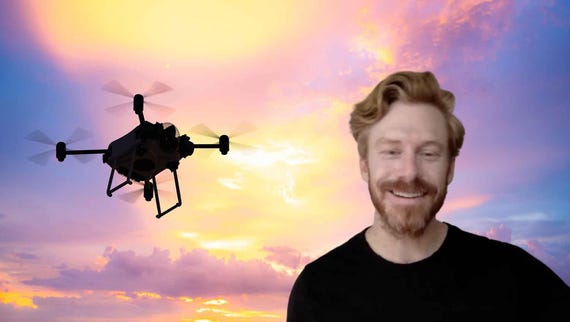 While countries around the world ponder how to build up secure, reliable, and cost-efficient infrastructure for their future 5G networks, two companies in the UK have come up with a rather unorthodox solution to deliver faster connectivity.

Engineering firm Cambridge Consultants and telecommunications company Stratospheric Platforms Limited (SPL) have unveiled a new proof-of-concept, which could see 5G beams broadcast from the skies thanks to antennas fitted onto drones flying some 20,000 meters above the ground.

The prototype that has been tested so far is only one eighth of the intended full size, but the companies hope that the final product will come in the form of a three square-meter antenna capable of beaming 5G directly onto areas up to 140 kilometers in diameter. The antennas will be integrated into zero-emission aircraft powered by hydrogen, and capable of carrying the equipment for up to nine days in a row.

According to Cambridge Consultants, a fleet of 60 aircrafts equipped with antennas would be enough to blanket the whole of the UK with 5G connectivity, delivering mobile speeds evenly across the country in excess of 100 Gbps.

SPL has been quietly working since 2014 on high-altitude platforms as a means of delivering communication services back on Earth. To do so, the company is developing hydrogen-powered aircrafts that can be fitted with telecommunications equipment, and essentially act as a telecoms mast in the stratosphere.

Weighing 3.5 tonnes, which is 150 times less than a Boeing 747, the aircrafts can only support a maximum payload of 140 kilograms, meaning that it was necessary to slim down the 5G antennas as much as possible. That's where Cambridge Consultants' engineers stepped in, designing ultra-thin antennas weighing 120 kilograms, which the company calls "a breakthrough" in radio design.

SPL's CEP Richard Deakin said: "It was essential that we overcame significant technical challenges in the design of the antenna to enable us to deliver massive data rates in a unique environment where power was limited, where weight was critical and where cooling in the thin, stratospheric air was difficult.

"The development and testing of the antenna has met or exceeded the design criteria and working with such a talented team at Cambridge Consultants has been one of the highlights of the program to date."

Each full-scale antenna is expected to create 480 individual beams targeting different locations on the surface of the Earth. The beams are steerable and can be shaped into patterns, to "paint" certain areas with 5G, such as a specific road or shipping lane. This could be particularly useful in bringing better connectivity to remote, isolated areas that are harder to reach for terrestrial operators.

By reconfiguring the beams, it will also be possible to target and track specific users, for example drivers in an autonomous car, and to provide coverage exactly where required, stopping if necessary at national borders. A single antenna with beams shaped appropriately, for instance, would be enough to provide coverage for the UK's 188 kilometer-long M25 motorway.

So far, SPL has tested one version of the technology as part of a partnership with Deutsche Telekom, but the trial was carried out at a lower altitude (14 kilometers), and with antennas designed to deliver LTE/4G data.

Although the remote aircraft successfully integrated into Deutsche Telekom's terrestrial network, delivering download speeds of 70Mbps and upload speeds of 23Mbps, the 5G product is therefore still a prototype. SPL nevertheless confirmed that the next step will be stratospheric 5G, with rollouts of the first commercial service expected to begin in Germany in 2024.

"Our role, to design and build this 'mega cell tower in the stratosphere', has seen us make breakthrough after breakthrough and we're excited to build on these innovations with SPL, on the path to commercial deployment," said Tim Fowler, chief sales officer at Cambridge Consultants.

Once the system is produced at scale, SPL and Cambridge Consultants estimate that the technology could connect over 500 million people, at only a fraction of the cost of maintaining the hundreds of Earth-bound masts that would be necessary to do the work of a single stratospheric antenna.

Some challenges remain, particularly when it comes to regulation. Although Cambridge Consultants confirmed that the aircrafts are certified for safe flight in civil airspace, different countries have their own specific rules to manage airborne transportation, and getting the appropriate authorizations might be one of the biggest hurdles going forward.

The UK companies' technology carries some parallels to Project Loon,  initiated by a former Google affiliate now known as X, which uses balloons floating at very high altitudes to deliver internet access to underserved areas. This year, Loon launched 35 balloons in the East African stratosphere, providing broadband services over a 50,000 square kilometer area in Kenya. Loon has, in addition, already secured approvals to fly over 50 countries and regions around the world.

Facebook kicked off a similar project a few years ago, to build a fleet of high-altitude drones that would bring connectivity to remote areas. Citing increasing investment in competing projects from aerospace companies, however, the social media giant abandoned the initiative two years ago.

Join Discussion for: These drones could beam down 5G from high...