Full Bio
Posted in Between the Lines on October 19, 2018 | Topic: Innovation 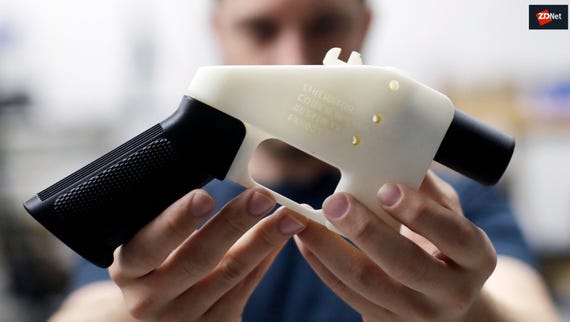 In the same way that no human fingerprint is exactly the same, neither are 3D printers -- and these small differences can be used to find the source of dangerous 3D-printed goods, researchers say.

According to academics from the University of Buffalo, there is a way to use the 'fingerprint' of 3D printers to accurately trace items printed through the machinery, which may include counterfeit goods, guns, and other weaponry.

"3D printing has many wonderful uses, but it's also a counterfeiter's dream," says Wenyao Xu, Ph.D., associate professor of computer science and engineering in UB's School of Engineering and Applied Sciences and lead author of the study. "Even more concerning, it has the potential to make firearms more readily available to people who are not allowed to possess them."

When a 3D printer performs a job, the hardware zig-zags during printing in the same manner as standard inkjet printers. Instead of ink, however, nozzles are used to shoot out plastic filaments or other materials in layers to create a three-dimensional object.

As the layers form, the 3D-printed object will contain submillimeter wrinkles and imperfections called "in-fill patterns" which are caused by a combination of the printer's model, make, nozzles, and other components.

No in-fill patterns are the same, and this is the key to tracking down a specific printer.

"3D printers are built to be the same. But there are slight variations in their hardware created during the manufacturing process that leads to unique, inevitable and unchangeable patterns in every object they print," Xu says.

In order to test the tracking method, the team printed five door keys from 14 common 3D printers. Each key was then scanned to create a digital image which was enhanced and filtered to pick out the in-fill patterns of each object.

The researchers then created an algorithm based on this data to calculate the variations of each key.

In total, the team was able to match each key to its printer with 99.8 percent accuracy.

3D printed weapons are not a common sight on our streets at present, but this does not mean they will not be one day.

It is not difficult to find blueprints for weapon components online. Cody Wilson, the creator of the online 3D printed gun blueprint repository, has found himself entangled with US law enforcement over the past few years after a series of tumultuous court battles relating to whether or not 3D gun blueprints should be freely available online.

A US court blocked the free download of these files, and so Wilson began offering them online for sale instead on a donation basis.

If given a method in which to track seized weaponry or goods, this could permit law enforcement to trace the manufacture of 3D-printed goods in the future. However, this potentially would require some kind of printer manufacturer registration of hardware and their 'fingerprints' at the source before being sold on to the general public.

The research will be presented this week at the Association for Computing Machinery's Conference on Computer and Communications Security in Toronto.

Join Discussion for: This is how researchers can now track 3D...