MIT researchers have created swallowable chips that can help identify blood in the gastrointestinal tract.
Written by Jo Best on Aug. 8, 2018 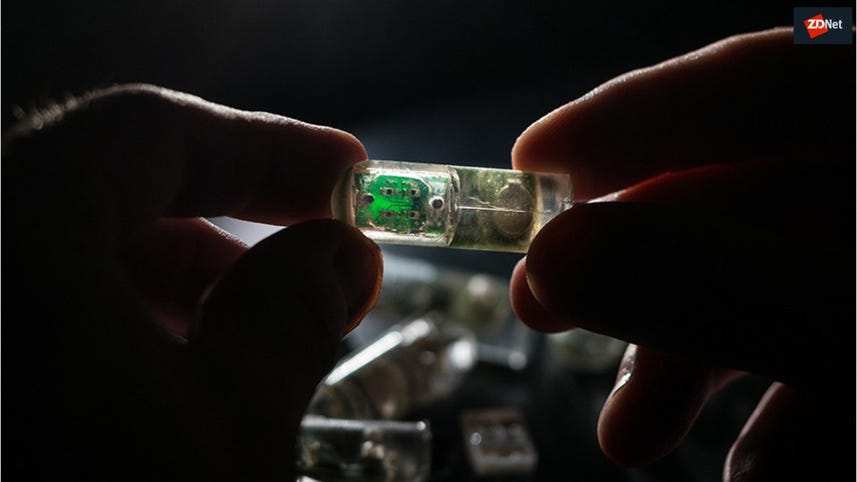 Anyone who's had an endoscopy is in no rush to have another. While a doctor feeds a tube-camera down the patient's throat to take a look into their stomach and beyond, patients try not to cough, gag, or be sick. Some people find it so uncomfortable they have to be sedated.

For those who are too frail to undergo the procedure, there are few alternatives to study the inside of the upper gastrointestinal tract -- for all its hardships, the endoscopy is the best way to identify bleeding in the gut.

Researchers at MIT have been working on a chip that could one day be offered to patients with suspected gastrointestinal bleeds instead of an endoscopy. The researchers have created a prototype of the chip that can be swallowed like a pill, sampling a patient's gastrointestinal environment for signs of bleeding as it travels through their digestive system.

"Currently, there aren't that many techniques to investigate what's going on in the gastrointestinal tract... it's very difficult to see the biochemical picture, especially in a non-invasive way," Mark Mimee, an MIT graduate student and one of the lead authors of the project, told ZDNet.

The chip doesn't just rely on electronic components to do its work, however: it has an army of bacterial sentinels too. The chip has four wells filled with genetically-engineered bacteria that are designed to react to haem, a protein found in red blood cells. If the bacteria in the chip encounter any haem, they express a genetic circuit that causes them to bioluminesce -- that is, if they see blood, the bacteria light up.

A photosensor within the chip detects the light level emitted by the bacteria, and the chip then converts it into data on whether blood has been found or not, sending it wirelessly to a receiver. The receiver plugs into a standard issue phone and communicates with an Android app built by an undergrad student at MIT.

"We looked at the literature to see if there were organisms that existed in nature that naturally sensed haem. We found some examples and we essentially took the machinery from those organisms and combined it into our probiotic strain of e. coli," Mimee said.

"Later on when the project was moving along and we were starting to integrate it with the electronics, [other researchers] had reported the detection of other clinically relevant molecules that could be used to monitor disease," he said. "We also took those sort of sensing systems that had been developed for those and incorporated them."

The bacteria engineered by the MIT researchers is a unique strain of E. coli. While some people may associate the bacteria with food poisoning outbreaks, variants of it are also found in probiotic yoghurts -- and it's those that are likely to find their way into the pill.

While earlier research had shown that bioluminescence from cells could be read by chips, previous processors had been too power-hungry for MIT's intended use.

"The first step was to design and test a circuit that could measure the luminescence but without consuming too much power. For the proof of concept, we built a system based on a lower-power chip that we made that can sense bioluminescence, and at least in a benchtop form factor, we showed we could read the luminescence from the cells that Mark and his lab had designed. The second step was to take that and miniaturise it down, and combine it with a small button-cell battery and a wireless transmitter and show that you could actually build a fully wireless, battery-powered luminescence system," Philip Nadeau, a former MIT postdoc and another of the lead authors of the project, said.

The chip now has an ultra-low power consumption, needing just 13 microwatts of energy to function. With such a low power demand, the chip could be kept in situ in the gut to monitor any bleeding over a period of time, as well as for a one-off sampling.

A number of departments from the university were involved in the creation of the system, from electrical engineering to biology. "Listening to each other, we found this interesting area where on the bio-side, they were currently reading out from their bacterial cells using a relatively large and power expensive lab equipment, and on our side, we didn't have the capability to do much bio sensing without adding to the electronics, while on the cell side they could do sensing quite well. We found the weaknesses and the strengths of the two technologies and then found a way to put them together," Nadeau said.

The chip's ability to detect small amounts of blood -- researchers have detected as little as 0.25mm2, or around one drop in tests -- could be used to detect certain diseases that cause internal bleeding without subjecting patients to endoscopies or colonoscopies. As well as offering a more pleasant alternative to invasive imaging, the chip-pill could potentially be used at home and readings sent directly to patients' phones, sparing them a visit to the hospital.

While the researchers initially looked at creating a chip to detect blood, the bacteria could be altered to enable the chip to identify even more conditions: a molecule called thiosulfate is thought to be found in the presence of inflammatory bowel diseases, such as ulcerative colitis or Crohn's, for example, while a bacterial signalling molecule called AHL could be a sign of bacterial infection.

The researchers predict that it could take between five and 10 years before the pill could be used commercially. One of the key challenges that will need to be addressed is the size of the pill, which is currently around 3cm by 1cm. While it can be swallowed at that size, for people with damaged gastrointestinal tracts, there's a risk that its dimensions could cause complications, so future work will look to shrink the device to more manageable levels. In future, the pill could also potentially be fuelled by a voltaic cell that generates energy from the acid environment of the stomach -- a pH that's so low it's not found anywhere else in the body.

Other future research could be directed at refining the pill to be able to detect not just the presence of blood, but also its location. Location is key in not only determining the difference between inflammatory bowel diseases such as ulcerative colitis, which is found mainly in the rectum and sigmoid colon, and Crohn's which can be found anywhere in the gastrointestinal tract.

Similarly, finding out where blood is coming from can help localise bowel cancer or ulcers. By adding pH and temperature sensors to the chip, or using it in conjunction with an external receiver in a belt-form factor, the system could potentially be used to pinpoint the site of the bleed.

Researchers at Purdue University are developing chips that could help scientists understand nerve conditions, and potentially help lay the foundations for neuroprosthetics.

Security
The four-day work week is coming: Here's what it could mean for you