Full Bio
Posted in Between the Lines on November 8, 2017 | Topic: Big Data 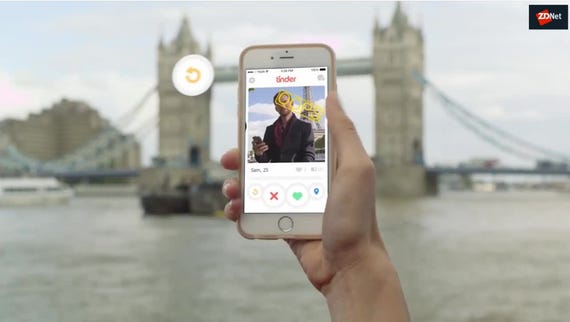 Video: Tinder is a cash cow because it's using AI to develop a dynamic pricing model

Match Group is ramping up the monetization on its popular Tinder app as investments in technology infrastructure, data science and market segmentation start to pay off. Next up will be geolocation tools and more artificial intelligence powered features that are likely to juice Tinder's dynamic pricing model.

The online dating company delivered a strong third quarter as it stabilized brands such as Match.com, OKCupid and PlentyofFish and revved the growth engine that is Tinder.

Gregory Blatt, outgoing CEO of Match Group, said that Tinder has been able to use the new "Likes You" feature to up sell customers to Tinder Gold, a premium plan. Tinder also has Tinder Plus, which is another premium service. Overall, Tinder added 476,000 paying monthly customers in the third quarter to hit 2.6 million.

Blatt, who will be replaced as CEO by Mandy Ginsberg, said marketing, a variety of up sell opportunities, performance improvements and optimizing features led to the Tinder gains. Blatt said Match is all about maximizing Tinder's revenue:

We currently have three ways that we monetize our users at Tinder: Subscriptions, a la carte purchases and advertising. I think the right way to think about our modernization efforts, as we develop features for our consumers that we think will add value, but by their nature can't really be offered to all our users. Once we've got the feature, we merchandise it in whatever way we think will maximize revenue. In other words, whether a feature is an la carte or we put in plus or we create a new SKU we call Gold, or whether we put a feature in all categories, it's really a tactical decision. Boost and Super Like, for instance, are available a la carte as part of Plus and as part of Gold.

The plan is to add a new feature to Tinder and garner a "surge" in subscriptions. Aside from converting free members to paying ones on Tinder, Match's plan is to also drive advertising revenue from direct sales and Facebook's ad network. Tinder Gold and Tinder Plus pricing varies on a number of factors.

Going forward, Tinder will get enhancements to the "post match experience" with dynamic content and activities matched to users. Tinder will be testing these location features in a few weeks with a roll-out in 2018.

"We plan to begin to launch a series of location-based features, each of which builds on the prior one, over time learning the distinction between digital and real-life dating and dating and simply engaging in your social life," said Blatt. "Another context of the same features could have different locations and uses, but the dating context creates a unique experience, and our scale is necessary to provide the density and depth of signal to make it effective. Again, these may or may not take off, but this factor has the potential to be defining for us."

The more interesting development will be seeing how Tinder uses artificial intelligence to drive matches as well as monetization and revenue growth. Tinder has been building its data science team and added Dr. Xue Liu, a computer science professor at McGill University, as its chief scientist. Tinder is also adding analytics and data science talent to its team.

Tinder's main objective is threading the needle between revenue growth, usability, new features and mining the data provided by 1.6 billion swipes a day and 1 million dates a week. When you start applying AI to Tinder's dynamic pricing model the potential for optimization gets interesting.

An Android app had Tinder Plus for $19.99 a month. Pricing is unclear at best in the Tinder app as well as on the web.

We took all the learnings from the other businesses and applied to Tinder. We've talked for a long time about the fact that we have effectively dynamic pricing program. Across our other businesses, we have add-ons, we have packages, we have discounting and premium pricing and a la carte. So we've actually done this far more intricately in our other businesses than we have at Tinder. This is really the beginning of doing it at Tinder. In fact, even before Gold, we do have multiple price points at Plus, which we talked about. They're geographically-driven. They are driven by a number of components to discounting.

To be sure, Tinder's matching system will be optimized more by AI, but the real win is going to revolve around pricing models.

How'd Tinder get this far on monetization?

2016: Match invested heavily in technology infrastructure and scaling its apps and performance. Blatt said Match paused in the fourth quarter of 2016 to tackle its technical debt and rewrite code for Tinder. In February, Blatt said:

There aren't that many startups that have gone from zero to where we are as quickly as he have. Usually startups have to rewrite their code when they start hitting scale. We hit it very quickly. We were starting to hit crash rates, we were starting to see, especially on Android, some retention issues because the app wasn't loading. Just real basic performance stuff.

The investment led to a 90 percent reduction in crash rates. Tinder also doubled tech resources and invested in discovery, profile and monetization features.

Q2 2017: Completed transition from Tinder as startup to more institutionalized company. Resources, better systems and clearer roadmaps were added. Tinder Gold tests were launched and the Android app rebuild started to pay off in terms of usage. Teams were focused on monetization and optimization.