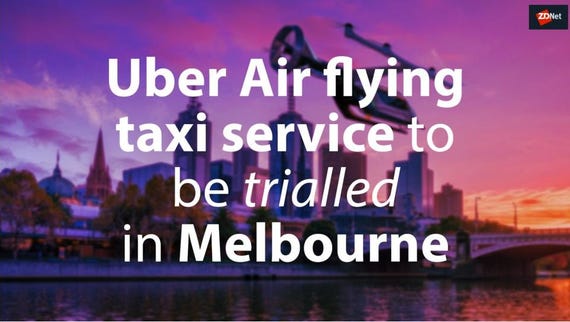 Melbourne has been announced as the third pilot city for Uber to trial its flying taxi service, Uber Air.

Test flights are pencilled in for next year, with plans for commercial operations to commence from 2023.

Uber Air is touted by the company as an "urban aviation ride-sharing product". It wants to ease traffic congestion on the ground.

"In the long term, the vision is for safe, quiet electric vehicles transporting tens of thousands of people across cities for the same price as an UberX trip over the same distance," Uber said in a statement announcing the initiative down under.

The company in August announced five possible markets to launch its pipedream: Australia, Brazil, France, India, and Japan. It also confirmed that from 2023, customers will be able to get a flight on-demand in Dallas and Los Angeles.

Uber had in February told an Australian House Infrastructure, Transport and Cities Committee that it was keen to trial Uber Air in either Melbourne or Sydney and that it just needed Australian governments to work alongside the Silicon Valley darling to make that happen.

In announcing Uber Air was coming to Australia, the company announced partnerships with Macquarie, Telstra, and Westfield-operator Scentre Group, and said it would work with existing partners including Melbourne Airport to develop the infrastructure and telecommunications needed to create the aviation network.

Macquarie Capital said it would work with Uber Elevate on the development and electrification of the skyports that would support vertical takeoff and landing, as well as help determine the best market structures and models for the infrastructure.

Telstra CEO Andy Penn said his company would work closely with Uber over the next 12 months to assess what network infrastructure, connectivity requirements, and other capabilities will be needed to support airspace mobility in urban centres.

"Telstra is excited to be part of a truly momentous point in time for Melbourne on the world stage. Our network strength, coverage and leadership in 5G, along with our ongoing work on drones and related standards, will support Uber's incredible technology and innovation to develop a service we have all imagined would one day be possible," Penn said.

"It is a testament to Telstra's network and technology capability that we are part of this exciting future."

SEE ALSO: Telstra flicks on a tiny piece of 5G in Melbourne and Sydney

Scentre Group, meanwhile, has jumped on board as an infrastructure partner.

"Today, over 3.8 million Aussies regularly use Uber as a reliable way to get from A to B, and governments across the country have recognised the important role ridesharing plays in the future of transport for our cities.

"Australian governments have adopted a forward-looking approach to ridesharing and future transport technology. This, coupled with Melbourne's unique demographic and geospatial factors, and culture of innovation and technology, makes Melbourne the perfect third launch city for Uber Air. We will see other Australian cities following soon after."

Although Anderson said the Victorian government has been "highly supportive", Uber's breakthrough into the state was not met without regulatory troubles.

Uber only received the green light to operate in the state in August 2017, however a decision passed by a Victorian County Court judge in favour of a Melbourne Uber driver in early 2016 effectively deemed the service as legal.

It had taken the state nearly three years to decide how to legislate ride-hailing services such as Uber, announcing back in September 2015 that it was preparing to regulate the service amid concerns from the local taxi industry.

The legal nod to operate in Victoria was coupled with a AU$1 levy imposed on all commercial trips from July 2018, with the revenue raised touted as replacing licence fees in order to help compensate taxi operators.

Last month, a class action lawsuit was filed against Uber, on behalf of thousands of Australian taxi and hire car drivers, for allegedly operating illegally which provided the company with an unfair competitive advantage.

The lawsuit was filed at the Victorian Supreme Court by law firm Maurice Blackburn Lawyers, and will cover more than 6,000 drivers, operators, and licence owners across Victoria, New South Wales, Queensland, and Western Australia, making it one of the biggest class actions in Australian history.

"We're thrilled that Melbourne has been chosen to partner with Uber Elevate to help start, nurture and grow what could become a new industry, revolutionising travel across the world," Victorian Treasurer and Minister for Economic Development Tim Pallas said.

"The future of transport is coming to Melbourne, giving us a flying start to capitalise on new opportunities that emerge as this industry takes off."

Uber began trading as a public company in May in one of the biggest IPO busts in Silicon Valley history. In its first quarter earnings the company posted a loss of $2.26 per diluted share, meaning Uber made a net loss more than $1 billion for the quarter.