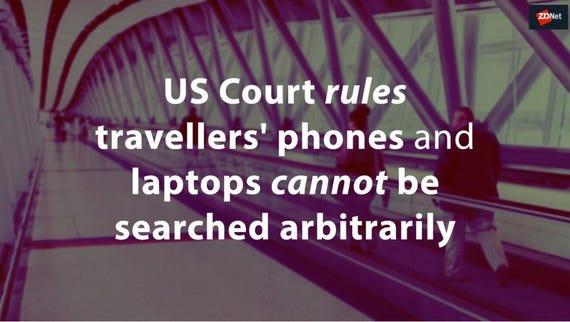 A federal court in Boston has ruled that US government agents cannot search phones and laptops of international travellers at airports and other US ports of entry without reasonable suspicion.

With the ruling on Tuesday, any warrantless searches will now be deemed as violations of the Fourth Amendment.

The American Civil Liberties Union (ACLU), who raised the action along with the Electronic Frontier Foundation (EFF) on behalf of 11 travellers who had their laptops and phones searched at the US border, called the ruling a major victory for privacy rights.

"This ruling significantly advances Fourth Amendment protections for the millions of international travellers who enter the United States every year," said Esha Bhandari, staff attorney with the ACLU's Speech, Privacy, and Technology Project.

"By putting an end to the government's ability to conduct suspicionless fishing expeditions, the court reaffirms that the border is not a lawless place and that we don't lose our privacy rights when we travel."

In her judgment, District Court Judge Denise J Casper concluded that searches of the 11 travellers conducted by US Customs and Border Patrol (CBP) and Immigration and Customs Enforcement (ICE) -- which provided access to photographs, contacts, emails, and data that was of a personally and professionally sensitive nature -- were breaches of their privacy.

Prior to the decision, CBP had long argued that travellers crossing into and out of the US border have no Fourth Amendment rights against unreasonable searches and seizures. According to the EFF, CBP conducted more than 33,000 searches, almost four times the number from just three years prior.

"The CBP and ICE policies for 'basic' and 'advanced' searches, as presently defined, violate the Fourth Amendment to the extent that the policies do not require reasonable suspicion that the devices contain contraband for both such classes of non-cursory searches and/or seizure of electronic devices," Casper found.

As a result of the ruling, CBP and ICE will no longer be able to stop travellers arbitrarily.

Casper noted in her decision that a person is only "reasonably suspicious" if government agents can "point to specific and articulable facts considered together with the rational inferences that can be drawn from those facts".

"This is a great day for travellers who now can cross the international border without fear that the government will, in the absence of any suspicion, ransack the extraordinarily sensitive information we all carry in our electronic devices," said Sophia Cope, EFF senior staff attorney.

The company has over 60 employees that are recipients of DACA permits, which allow them to stay in the country despite not being US citizens.

After the FBI and DEA failed to comply with a FOIA request pertaining to their use of biometric data, the ACLU is asking a federal court to intervene.

US to collect social media profiles from immigrants, asylum seekers, and refugees

The process of getting refugee status, a green card, and citizenship will become way more intrusive.

The heart of the matter stems from an investigation into suspected gang activity.

Whether traveling for business or the holidays this month, follow these tips from Matrix Integration to keep your devices safe.

Join Discussion for: US Court rules travellers' phones and laptops...