What happens when you can place a 4K camera virtually anywhere in a three-dimensional space? It’s like being able to examine something through a magnifying glass, even if it’s in a place that’s hard to reach by climbing.
Written by David Gewirtz, Distinguished Lecturer on April 4, 2018 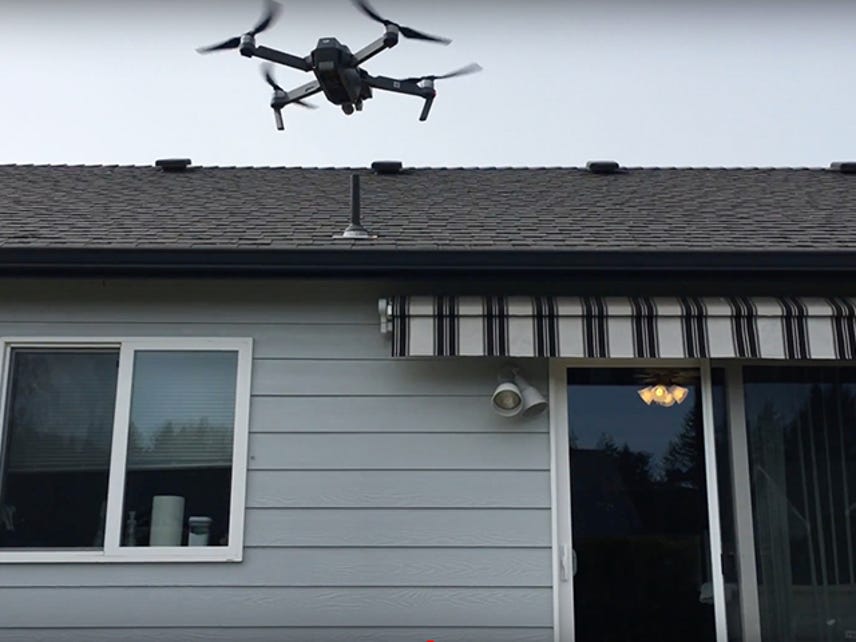 OK, OK. We get it. Drones are fun. You can use them to make pretty videos with jazzy music. That's nice. But what about using drones to do some real work? Welcome to the latest installment of ZDNet's DIY-IT Drone and Robotics Discovery Series. This article explores how to use a drone to help with building maintenance.

If you use a drone for commercial work, the FAA requires you to earn a drone pilot's license. This is a lot of work requiring comprehensive knowledge of regulations and flight capabilities. On the other hand, if you don't get paid to fly your drone, all the FAA requires is that you register your aircraft.

I am not nearly skilled or knowledgeable enough to get a commercial license. I'm still getting comfortable flying, managing, and controlling drones. That said, I think it's important to share with you ways in which these devices can provide tangible value beyond pretty landscape videos.

Read also: How to register your drone (it's the law... again)

Weird puddle on the stove

I recently had the opportunity to explore this when I found an odd puddle of water in my kitchen. I woke up like I do every morning: Coffee first. But then, what's this? There was a weird puddle on the stove.

The only place it could have come from was the vent at the top of the stove. This hood normally exhausts steam and cooking smoke through a vent atop the house.

We hadn't noticed leaks before, even though it rains a lot here in Oregon. But the night before we discovered the stove puddle, it was the coldest it had been since we moved. It got down to the low 20s (Fahrenheit) overnight. I thought there might be a leak exacerbated by the cold in one of the roof vents, or some kind of problem with the roof flashing.

I had no desire to climb up on the roof on such a cold day, so I decided to launch the trusty Mavic Pro to see what I could find. I waited for the wind to die down, because it's not really a good idea to fly a drone in high winds. It's particularly not a great idea if you're doing so mere feet from your roof.

I set the drone on a patio paver and launched it. Once it was a few feet up in the air, I rotated it to face the house. Because I was flying in a residential area, I made sure to point my camera gimbal straight down, so the only filming I would do was of my own roof.

I lifted the drone up about 15 feet, and then I set the device to tripod mode. This has the effect of substantially reducing the speed of the drone for more precise flying.

As the accompanying video shows, I flew close to the house and positioned the camera on top of the vent to get a closer look.

This kind of close flying, especially with 4K video enabled on your drone, will help you do some very detailed inspections. For example, I can see using this technique to inspect gutters or, in someplace like Florida, inspect the whole roof for damage after high winds or a hurricane.

I wanted to look at that vent from multiple angles, so I rotated the drone around to get a clear view. The video shows detailed shots that give you a good idea of what you can get from close drone filming.

I was a little nervous as I flew close to the peak of the roof. It wasn't clear from the small iPhone screen whether I was high enough to pass over it. This is when it's good to have your drone in your direct line of sight. I moved far enough away from the house to see the drone from the ground, and then I carefully navigated it over the peak with room to spare.

Using a drone as a tool

While the Mavic Pro was up on the roof, I decided to take a few minutes to check out the other vents. I didn't see any sign of water damage or anything else that gave me concern.

I did notice some rust spots on the one vent I suspected of having a leak. I also noticed some possible gaps. Without having to climb up on the roof, I was able to do some investigation before calling in a handyman to do the actual repairs. I captured images of the areas of concern and texted those to him, so he knew what parts and tools to bring before he showed up later that day.

This is a great example of using a drone as a tool, rather than simply a camera. Even without a commercial drone license, you can see how drones are particularly helpful in building and property inspection and checking for damage.

Finally, a quick shout-out of thanks to the folks at Wellbots. They provided the Mavic Pro for this discovery series.

What cool practical uses can you think of for drones? Let us know in the TalkBacks below.

Raytheon and others developing networked drone swarms for combat

The future of warfare lies in large numbers of inexpensive, unmanned tactical platforms that can operate in concert with one another

A tech startup thinks it may have the solution to the headache of policing Poland's most polluted areas.

Transportation
The 5 best surveillance drones of 2022