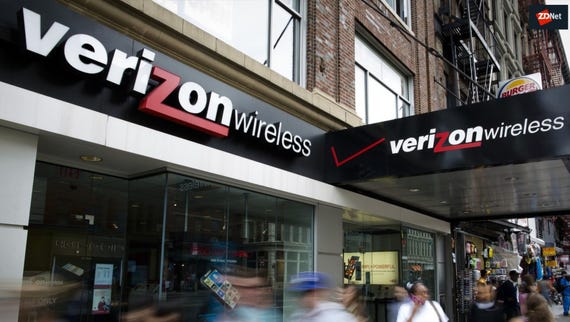 Verizon's third quarter was better-than-expected as the company said its 5G rollout is on schedule. However, Verizon is managing an underperforming Oath media unit, video FiOS defections and intense wireless competition.

The telecom giant reported third quarter earnings of $1.19 a share and $1.22 a share on a non-GAAP basis. Revenue from the third quarter checked in at $32.6 billion, up 2.8 percent from a year ago. Verizon said it added 515,000 retail postpaid net additions and had a 0.80 customer churn.

Verizon's results were interesting since the company is prepping for 5G and value added services for consumers and enterprises yet trying to navigate the company's acquisitions of AOL and Yahoo. CEO Hans Vestberg said the company is "investing in networks" and "best positioned to take full advantage" of 5G.

At Verizon, we believe that true 5G requires an ultra-wideband solution utilizing millimeterwave spectrum to address the full array of use cases that 5G enables. Our network preparation for nationwide 5G deployment requires deep fiber resources, a vast array of small cells, critical spectrum holdings, and mobile edge computing capabilities, all of which we have been assembling for years.

The telecom giant is in a race to build out its 5G network as T-Mobile, Sprint and AT&T have similar plans. Verizon's launch of 5G Home, which runs on proprietary standards for now, has started installs and Ellis said the company will learn and iterate as 5G Home rolls out.

I will add that we started doing installs earlier this month. And we've seen performance as we've expected since we started doing those installs. The technology works, our customers are getting the experience they expected, and we are getting a lot of good learning which will benefit us next year when we roll out the product to that much larger audience.

5G Home will become more significant as we expand coverage and we get on the global standards equipment in 2019. And I would expect that that would start to have an impact on consolidated revenues as we get into 2020 and beyond.

Here's a look at the moving parts.

Also see: What is 5G? Everything you need to know about the new wireless revolution | 5G technology: A business leader's guide (Tech Pro Research) | All 5G stories | CNET: 5G is almost a reality. Here's what it'll really feel like

Ellis noted that Oath business is tied to desktop and search and that's a challenge for the business. He added:

The leadership team at Oath is focused on returning to revenue growth by completing the integration of the legacy AOL and Yahoo advertising platforms by year-end, implementing initiatives to realize synergies across all of our media assets, and building services around our core content pillars of sports, news, finance, and entertainment. Additionally, we are utilizing Oath's technical capabilities, such as artificial intelligence, augmented reality, and virtual reality across all of Verizon.

As for the outlook, Verizon said it will post revenue growth in the low- to mid-single digits on a percentage basis. The company also projected capital spending to be between $16.6 billion to $17 billion for 2018. That cap-ex guidance was lower than expected. Ellis said:

We are seeing the benefits of some changes in how we run that organization, using new capacity utilization models, changes to our inventory management systems, adoption of procurement analytical tools, and a whole host of other things.