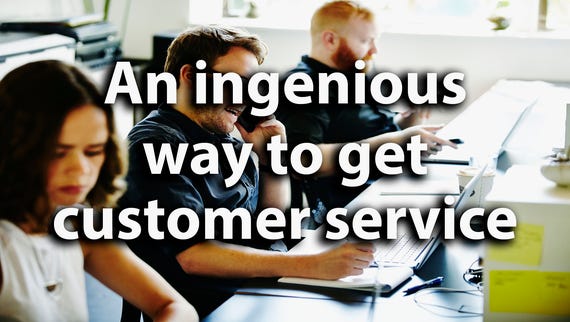 A Verizon customer was angry. So he found an ingenious way to get customer service
Watch Now

Today, we're disappearing into the heart, soul, and mind of someone who had a little contretemps with Verizon.

The best phone plans for businesses There are three major wireless carriers in the US, and each one has options to support your business needs.

No, he's surely not the first, nor the last.

He's also not the first nor the last to have had a similar contretemps with any of the remaining phone carriers.

I feel, however, that Kevin's solution to his customer service problem was markedly more ingenious than most could create.

Kevin is a long-time friend. A highly intelligent, deeply nerdy and, once in a while, gregariously opinionated friend.

He was going on vacation and he'd heard that AT&T's signal was poor at his remote east coast destination. He needed to ensure he had Wi-Fi, as he had an important meeting with extremely celebrated people. So he bought the most advanced Verizon jetpack and disappeared on his travels.

Sadly, the jetpack failed to function just before his big meeting started. But Kevin tried to be sanguine.

On his return, he received an email from Verizon. It told him to register for My Verizon in order to view his bills. It said in order to enjoy paper-free billing he must be registered.

"Registration is quick and easy," said the email. But when he clicked on "Sign up now," nothing happened.

Let's have Kevin take up the story: "So I called Verizon customer service and I couldn't talk to anyone because I didn't have a Verizon phone account."

It's likely that his Jetpack came with a phone number, but Kevin had been unaware.

"I thought all I would need was my social security number, my credit card, address, and all that," he told me.

He was, therefore, a touch frustrated.

"So I tried using chat," he said. "And I got through five people who didn't seem helpful."

"Why didn't they seem helpful?" I asked.

"They said I needed the account number and location number," he explained. "That's when I explained I didn't have them and repeated that I went to them trying to register my damn device."

To be clear, Kevin may have been at some fault here and knows it. He hadn't been aware enough to note the phone number attached to the Jetpack. You'd think, though, offering a few personal details would have got the process rolling.

The chatline, he said, went through sales and had only one recommendation -- to call customer service. So back there went Kevin.

When Kevin called customer service, he said he was on hold for more than an hour.

That's when he had an idea. As it turned out, it was the sort of clever idea that companies hope too many people don't have.

"I called collections," he told me.

"Collections was a lot more responsive than customer service," he said. "I went to them and even though I wasn't in collection, I knew someone would answer the phone."

"How could you be so sure?" I wondered.

"They have people standing by to get money," he explained, quite pleased with himself.

The 10 best smartphones Whatever your priorities -- from 5G to an amazing camera -- there's a phone here to meet your every need.

"But didn't they send you straight back to customer service?"

"No, they were all too happy to register my device," said Kevin. "They were just disappointed that the money wasn't in arrears."

There's a certain poetry to the notion that the people who actually gave Kevin fine customer service were the same people who are there to try and get money out of him, if ever he was slow to pay.

Could it be that they work in collections because they have a surfeit of charm? And how was it that collections could register his device when the sales people on the chatline couldn't?

Of course this could have happened with any carrier and with any number of other service companies. This just happened to be Verizon.

Then again, over the last year I've heard from quite a few current and former Verizon customer service employees who aren't entirely happy with the way things are going at the company. Those who work in stores told me they think Verizon is trying to move all customer service online. I wonder how that'll go.

Ultimately, I marvel at Kevin's instinct that, if customer service is slow -- or even entirely AWOL -- there's always collections who'll pick up the phone.

I wonder if the collections staff get a bonus for performing customer service duties.

Join Discussion for: Verizon wasn't responding, so an angry customer...