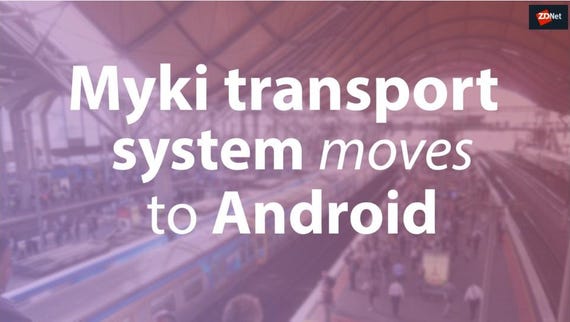 The Victorian government has announced that Android users will be able to use their smartphones to pay for travel on the state's public transport network before the end of this week.

From Thursday morning, passengers will be able to pay for transport tickets on their Android smartphones via the myki mobile app. According to the Victorian government, mobile myki will be able to be used on existing myki gates and readers at the state's train stations, myki-enabled buses, as well as on Melbourne's trams.

The system was developed in partnership with Victorian ticketing provider NTT Data and Google, and uses Google Pay.

"Mobile myki will make topping up and touching on quicker, and travelling easier," Minister for Public Transport Melissa Horne said.

Using the app negates the need to carry a physical card. Top-ups and recent travel history are also available within the app.

Physical myki cards, which are used in around 700 million transactions each year, will continue to be available, with mobile myki serving as an additional method for transit payment.

The Victorian government said it is currently in discussions and carrying out technical assessments to make mobile myki available across other smartphone platforms beyond Android.

The introduction of the mobile ticketing option follows trials of the system which had commenced in July, and a pilot that kicked off in January.

While Melbourne has gone down the path of replacing physical cards with the use of smartphone apps, Sydneysiders can replace physical cards through payment via debit and credit cards, and any linked mobile wallets, instead.

In November, the New South Wales government extended its transit payment options, allowing commuters to pay for transit tickets with debit and credit cards, in lieu of using an Opal card, across any NSW Opal transport service.

Commuters in NSW can "tap on-and-off" using their PayPass or PayWave-enabled Visa, Mastercard, and American Express debit or credit cards, with the feature extended to mobile wallets on smartphones, tablets, and wearable devices linked to those cards.

Concession fares and travel discounts, however, are still only available in NSW via the use of a physical Opal card.

4,000 commuters will be trialling the new public transport payment function.

Cubic will be responsible for upgrading the current system to allow for contactless payment via bankcards, mobile phones, and wearables on public transport.

Commuters using a PayPass or PayWave-enabled debit or credit card can now use their card or linked smartphone or wearable device across the Sydney Trains network.

The two global leaders have formed a smart city pilot to combine data and experience platforms to benefit cities around the world.