Full Bio
Posted in Between the Lines on January 24, 2018 | Topic: Innovation 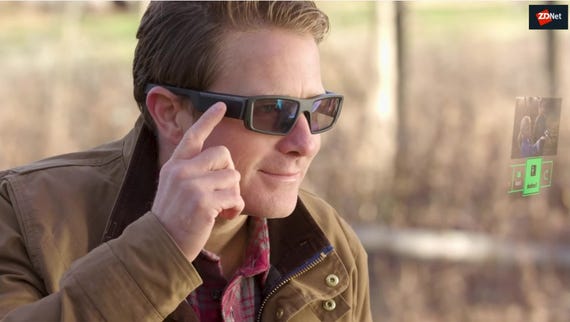 Vuzix on Wednesday launched a new program for enterprises, developers, and consumers to gain early access to its Google Glass-like Blade smartglasses.

The Blade Edge program follows Vuzix's unveiling of its Blade-branded sunglasses during CES 2018 that are set to be released to the public later this year. It replaces the Blade Beta Developer kit pre-order program, which Vuzix said is sold out and now closed (pre-orders will be honored).

Application for pre-order to the Blade Edge program requires a $250 deposit towards the $1,000 Blade Edge Kit that includes Blade Edge Unit and developer tools. A shipping date hasn't been announced by Vuzix.

The Blade Edge shown earlier this month featured heads-up information projected on its lenses and Amazon Alexa integration. The glasses, capable of pairing with Android, iOS, and Wi-Fi, have a built-in 8-megapixel camera capable of capturing 1080p video, microphone and side-mounted touchpad.

"The launch of the new Vuzix Blade Edge program will now allow the Company to address the strong and growing interest of thousands of developers, enterprise customers and consumers," Paul Travers, CEO and president of Vuzix, said in a statement. "This much larger second wave of early Blade hardware will not only provide a competitive 'edge' to the developers and enterprise companies accepted into the program, but will also foster a larger ecosystem of consumer and enterprise apps that will bring even more value to the Blade user community when the Blade becomes publicly available later this year."