The latest battleground for tech's big names is both small and personal. Forget the desktop, the server room, or the cloud - the Silicon Valley giants are after your wrist.

With the Apple Watch due to go on sale on April 24, Intel and Google have, somewhat belatedly, revealed their own take on connected wristwear.

The new smartwatch is likely to be based on the 155-year-old watchmaker's iconic Carrera timepiece, will run Google's Android Wear software and be powered by an Intel chip. 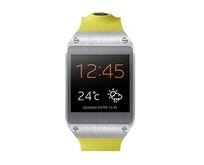 Smartwatches aren't the next big thing. The next big thing is already here One chart shows why it's going to be an uphill battle for smartwatch makers to convince buyers to hand over their cash. History is repeating itself, while the real gadget innovation is coming from another direction.

Beyond that, little is known about the device. There's no prototype, and no suggestion of a launch date, although it's expected to go on sale towards the end of the year.

News of the Apple Watch rival, announced last week at the international watch fair in Basel, Switzerland, was keenly anticipated - following as it did Swatch's announcement that it would be making its own smartwatch.

In Switzerland, a country where watches - both smart and dumb - are a principal export, questions have been raised for a while about how the Swiss watch industry will cope with the threat of the Apple Watch.

There are fears that the industry is underestimating the Apple threat, in the same way it did with competition from Japanese Quartz watches in the 1970s, which ended up with near disastrous consequences.

Watchmaking is important to the country's economy. Switzerland is the world's biggest watchmaker, accounting for 54 percent of the market - 18.3 percent from Swatch Group alone. Last year, the company reported sales of CHF 8.7bn (€8.27bn) - three percent up year on year.

But there's more to the story. As Swatch co-inventor Elmar Mock, who now heads an innovation consultancy called Creaholic, points out, only one in every 200 watches made worldwide is Swiss, but the profit on that one Swiss watch is greater than the other 199 combined.

The winners of the profit war are heading for a new Ice Age, Mock recently told Bloomberg. "Apple will succeed quickly. It will put a lot of pressure on the traditional watch industry and jobs in Switzerland... anything in the price range of 500 francs to 1,000 francs is really in danger," he said.

According to the consultants' definition, a smartwatch is a wrist-worn device that shows the time and has a wireless connection to the internet. If Apple does make its watch the breakout product in wearables, the Swiss watchmakers will be turning their attention to the market in a more significant way.

By then, however, it may be too late.

The Swiss watchmakers once had a chance to get in on Apple's action - and they blew it.

Back in 2013 Swatch Group boss Nick Hayek said in an interview with the Frankfurter Allemeigne that he'd had "good discussions" with Apple over creating a smartwatch together. No agreement was reached and, according to Swiss reports, it was Swatch that turned down the idea of working with Apple.

Initially the famous name watchmakers were dismissive of the Apple threat. The general view was that a watch based on technology, which by its very nature is short-lived and rapidly-changing, could never have the same 'timeless' appeal as a classic watch.

Most agree that the top-end, status brands like Rolex, Cartier, or Patek Philippe don't need to worry: Apple's main target is the lower end manufacturers, like Swatch, whose brands also include Omega, Longines, and Tissot. Between them, such brands make about 30 percent of their revenues from low mid-range devices that are similar in price to the Apple Watch.

How will Swatch respond?

Swatch has already released wearable tech: the new Swatch Touch Zero One is a waterproof fitness tracker targeted at a very specialist market - beach volleyball players. It makes use of standard watch batteries, which can last months - a far charge from the Apple Watch's 24-hour use time.

Swatch's first connected watch proper is due out in May, with others following later in the year. When announcing the news, Swatch's Hayek took a couple of swipes at Apple.

Firstly, he highlighted that Swatch wristwear will have not one but two types of wireless radios, NFC and Bluetooth.

Before the iWatch: A history of smartwatches, in pictures Tech giants have been trying to get the smartwatch right for nearly two decades. Take a tour starting with the earliest smartwatches right up to the very latest LTE models -- and all the weird and wonderful in between.

The NFC chip enables contactless payment (although maybe not Apple Pay). In a land that depends on tourism, this chip also allows users to open hotel doors and other compatible locks. The first touchless pay agreements for Swatch watches have been set up with China Union Pay in China, with talks underway with Visa to cover other parts of the world.

The Bluetooth chip allows watches to send and receive data from smartphones, so users can get news updates, messages, or other notifications on their watch. Models with Bluetooth are expected in the summer.

Secondly, the Swiss-made smartwatches will have long-lasting batteries. There'll be no need to recharge them every night, as seems necessary with the new Apple model.

If there's one way the Swiss industry can differentiate from Apple, it's likely to be battery: local watch manufacturers and researchers are always looking for better ways to balance energy consumption and battery life.

Vaucher Manufacture in Fleurier, which specialises in the production of watch movements, is looking at creating a type of dynamo, where wrist movements generate battery power to run the smartwatch.

Switzerland may be looking close to home for battery tech, but other vital elements of connected timepieces are likely to come from further afield.

Swiss watch brand TAG Heuer's link-up with Google and Intel is proving to be contentious: as the motor of the watch is not made in Switzerland, the final product can't be labelled 'Swiss made'.

Matching Swiss watchmaking and Silicon Valley was a necessity, according to Jean-Claude Biver, president of the watch division at LVMH Group and CEO of Tag Heuer.

"Our in-house expertise in the area of microprocessors is extremely limited. By partnering with a giant of Silicon Valley, we are guaranteed to be always at the forefront of new technologies. In Switzerland, we would have had to work with a whole series of companies. I prefer to talk to the Pope rather than chase the priests in every village," he told Swiss news agency SWI.

This move has angered the many in Switzerland who believe the country holds the skills to develop smartwatches.

The big-name watchmakers had already rejected the idea of developing smartwatches before Apple Watch came along - leaving it to the startups willing to do it alone.

One such startup, Geneva-based company Hyetis, originally approached the major Swiss watch brands but was "rejected out-of-hand", according to company founder Arny Kapshitzer.

Now he's launched the company with the help of a Swiss investor, and the company's first fully Swiss-made smartwatch is due to launch this spring.

Other manufacturers are taking a different approach.

Rather than create a smartwatch, Montblanc, part of the Swiss luxury goods group Richemont, has gone for a smartwatch strap. The new e-Strap is a bracelet attached to traditional Montblanc watches. Opposite the watch face is a touch screen connected by Bluetooth to a smartphone, with a dedicated app for Android and iOS. In line with the company's colour scheme, the display is black and white but it will check email, receive notifications, and store flight details.

Swiss startup MyKronoz is launching the ZePhone. With a larger face than most smartwatches, it runs full Android, rather than Android Wear, and as it has its own SIM card, it is one of the few smartwatches that's actually a phone on the wrist.

French company Withings has launched a Swiss-made smartwatch, called Activite, an activity tracker in the form of a watch that works with an app on your smartphone via low-energy Bluetooth.

Spanish-Swiss company Festina is also due to launch its first 'Swiss made' smartwatches soon.

Coming from the tech world as opposed to the watch world, Geneva cyber-security company WISeKey has launched a watch (WIS.WATCH) that uses NFC to let the watch connect with a user's smartphone and authorise access to applications and personal data.

But there is a gathering shadow over the watch face. Many smartwatches, like fitness bands such as Fitbit or Jawbone, track health data - whether it's daily steps taken or how much sleep users get at night.

What happens to this data? In most instances, it's stored in the cloud - which means for the Swiss, it's typically kept outside Switzerland. Although the information is fairly banal, it could be used by health insurers, for example, to alter policy terms for those who decline to wear a health band or fail to meet targets set by one.

That at least is the concern of the Swiss data protection commissioner, Hanspeter Thür, who wrote on his blog: "These devices are dangerous things if we don't use them the right way."

While Switzerland is looking at tightening its own data protection laws to cover wearables, acting alone won't be effective. Thür is looking for European-wide action - so that companies have to comply with tighter privacy regulations at the point where they want to distribute their product in Europe.

Join Discussion for: Watch out: Will Apple kill off the Swiss...