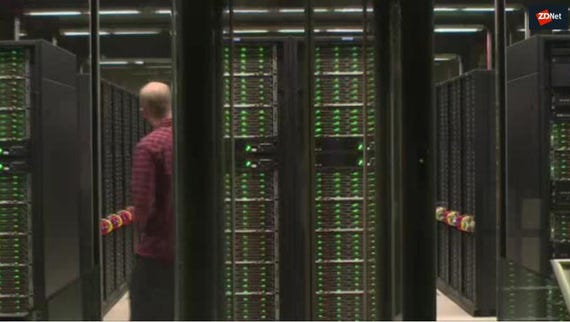 Data centers keep the world running: This is how they're dealing with the crisis
Watch Now

As big tech and smaller companies alike start implementing permanent flexible work policies, and "work-from-home-forever" becomes the latest buzz-phrase, some employees are rubbing their hands together at the prospect of logging into meetings straight from their living room on a regular basis, even once the COVID-19 crisis has passed.

For others, whose roles consist of keeping the global digital infrastructure up and running, it mostly means that more work is yet to come. The data centers that host every single one of our digital moves are bracing themselves for a serious up-tick in demand, even as we start seeing an easing of COVID-19 restrictions throughout the UK and Europe.

It's not like data center workers have had it easy throughout the pandemic – in fact, it's quite the contrary. As organizations switched to remote working, operators and engineers have been working round-the-clock to make sure that the digital world didn't collapse at its most critical hour.

SEE: How to become a database administrator: A cheat sheet (TechRepublic)

Data center staff are still operating on-site, and have been throughout the crisis, constantly overseeing and maintaining the infrastructure to prevent outages. This has meant segregated shifts, lots of extra hand sanitizer, and, to deal with the volume of work, much longer hours.

Matt Pullen, Europe's managing director for CyrusOne, a real estate company specializing in data centers, tells ZDNet: "A lot of people haven't been as busy as we've been. People have been working incredibly hard for a long time, on longer hours and extended shifts."

"We saw the impact immediately in our sector as hyperscalers started to draw down on their reservations to manage the increased demand. And this is just the tip of the iceberg," he continues.

The coronavirus pandemic has forced a crash-course in digitization onto most organizations, and the learnings won't go away with the crisis. As busy as data center operators have been in the past few months, they are about to get busier.

Pullen expects demand for digital services to keep growing as consumers keep their e-economy habits, and businesses let their employees work from home. The biggest surge to come will be in enterprise adoption of the cloud.

He points to recent figures released by research firm Gartner, which show that cloud spending will be the only bright spot in an otherwise pessimistic outlook for IT in the wake of COVID-19. While IT spending is expected to contract by 8% in the next year, public cloud services are expected to grow by almost 20%.

"We haven't seen the real surge yet in enterprises outsourcing from on-premise to the cloud," says Pullen. "But in times of crisis, doing this allows you to focus on your core business, and not on your data center. It's about outsourcing the risk and the management of risk to others. Naturally, we'll see an acceleration of that after COVID-19."

TechUK, the organization that represents the technology industry in the UK, is already drafting recovery plans for the data center industry. Topping the list of issues likely to cause concern among operators is the need to fulfill orders for new capacity, and to accommodate customer demands that require urgent infrastructure updates.

As demand increases, more data center space needs to be built. Until now, despite the pandemic's huge impact on digital traffic, capacity has not been a significant issue because most businesses plan for much more space than they actually need. Three months into the crisis, however, the limits of that extra capacity are starting to be reached.

"The big surge in demand has not necessarily been noticed because hyperscaler cloud companies have multiple platforms with capability in each, which has gradually been absorbed," says Pullen. "But the loads in each data center have significantly increased."

"Normally, they would be consuming between 60% and 70% of their capacity, but they are now up to 90%, sometimes 100% of their loads, which creates a huge strain. We're going to have that issue coming through," he adds.

Matters might get worse due to an unexpected factor: the weather. The virus, says Pullen, hit around mid-March, when temperatures were cooler, and buildings weren't working under extreme conditions. In many cases, maintenance was scaled back when possible to prioritize social distancing.

Come the summer, and the equipment will have to be working at full throttle, under much higher temperatures, and after a time of limited maintenance. "We're going into a tough period," says Pullen.

Of course, the solution is ultimately to build up some more infrastructure. Unfortunately, constructing brand-new data center capacity doesn't happen overnight – and especially not in the hesitant wake of a pandemic, with supply chains affected and the threat of a second wave of infections looming.

To build a data center, equipment needs to be sourced from various regions; for example, northern Italy is a big supplier of uninterruptible power supply components, as well as of the engineers that supervise the final commissioning of the systems. With governments still feeling their way around travel restrictions, therefore, supply-chain issues and delays are likely to persist.

"During the pandemic, everyone accepted that there would be delays in receiving data centers," says Pullen. "There was a sense of togetherness. But as demand continues to surge, there will be a lot more anxiety on the customers' part to make sure delivery dates are met. We'll have to look at being more and more efficient in our delivery on-site and in our supply chains."

The stakes are significant: techUK, in a timeline of risks posed by the pandemic to the industry, indicates that construction delays and interruptions are the highest risks in the long term. This could snow-ball, according to the organization, into anticipated digital infrastructure not being in place, customer businesses being impacted, the speed of recovery slowing down, and ultimately, future resilience weakening.

According to Pullen, it is key that policy-makers provide as much support as possible to help overcome the issues anticipated by the industry. Most importantly, he mentions the importance of relaxing rules around construction permits.

"All we can see is the land, but we have to work with the authorities to make sure we get the land," he says. "If it takes you three, four, or five months longer to get a permit, it'll take that much longer to build, too."

Pullen points to Germany, where data centers are recognized as critical national infrastructure (CNI) by default, which inevitably facilitates discussions with the government when it comes to policy making. In the UK, on the other hand, data center workers didn't even initially make it on the list of key workers determining who would be able to travel to work during lockdown.

The Department for Digital, Culture, Media and Sport (DCMS) was swift in responding to the industry's concerns and eventually added data center workers to the list at the start of March. "I still think it is really important that we also get listed as CNI," says Pullen. "If anything, to enable more success in streamlining things like permit applications."

Things are changing, however, and largely thanks to the COVID-19 pandemic. DCMS has now set up a dedicated task force to "work with the sector and build a knowledge base within the government about data centers". The group, which will work for the next 12 months, has been praised by techUK as signalling "a seismic change in terms of policy dialogue."

Pullen is optimistic, too: DCMS's sudden interest and recognition of data centers' importance is encouraging. As the coronavirus crisis unrolled, the digital infrastructure kept the country going; seeing official validation of data center workers' accomplishments can only be a boost to the industry.

"Everybody working in data centers is proud of what they do, but they come from a very small base," says Pullen. "People are coming to understand what that weird, grey, innocuous building on the corner of that industrial estate is – and how it supports the national and global economy."

Join Discussion for: 'We're going into a tough period': For data...