That's the sound of Microsoft's update servers, counting down to the public release of Windows 10 version 20H2, aka the October 2020 Update.

It's also an accurate description of the new release cadence for Windows 10, with each tick representing a major release in the first half of the year and the tock marking the release of a minor update in the second half of the year.

That's what happened in 2019, when Microsoft released version 1909 as a small "enablement package" that took only a few minutes to download and install on systems that were already running version 1903.

Version 20H2 is following the exact same playbook. Just as it did with last year's second-half release, Microsoft announced months in advance that the October 2020 Update would "offer a scoped set of features to improve performance and enhance quality." If you're not up on your Microsoft jargon, allow me to translate: There are very few new features in this update.

It will be available as an optional update, meaning you'll have to explicitly choose to download and install the 20H2 update unless your device has reached the end of support for your current Windows 10 version.

The most obvious change, of course, is the name of the release. The previous "version yymm" naming convention resulted in 2020's first release appearing as though it had been released 16 years ago, in 2004. Had Microsoft stuck to the same naming convention, the H2 version number would have been either 2009 or 2010. So, instead, the company changed the way it labels new feature updates to use H1 and H2 where the month number used to be.

After the upgrade, this is the version information you'll see on the About page in Settings. 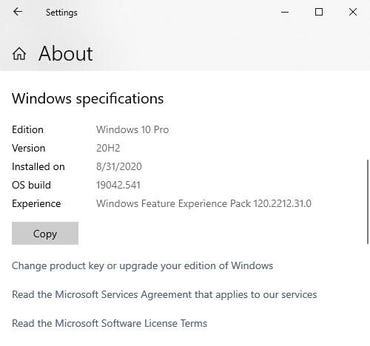 Once again, the version numbering follows last year's playbook, incrementing the major build number by 1, from 19041 to 19042.

On a PC that's already running version 2004, the upgrade takes just a few minutes. Upgrading from an older version downloads and installs the full feature update. Expect that one to take the normal 20-30 minutes (or even longer on older hardware).

Because this is an H2 release, businesses that have deployed Windows 10 Enterprise qualify for a greatly expanded support lifecycle of 30 months instead of the usual 18 months.

The fact that this is a "light" update doesn't mean it's completely devoid of new features. Here's the short list of what's new.

This will be the first edition of Windows 10 that automatically includes the new Chromium-based Microsoft Edge browser instead of the legacy version of Edge.

When signing in with a new account, you're prompted to complete setup of the new Edge, with no trace of the old browser visible.

Beginning with this release, the visual design of the Start menu changes, dropping the solid color behind tiles and replacing it with a partially transparent background. It's a particularly nice refresh on the scrolling apps list, helping the program icons stand out in much the same way favicons identify tabs in a web browser.

The addition of theme-aware tiles means you can turn on a dark theme, choose an accent color, and apply that accent color behind any pinned tiles on Start.

Meanwhile, Microsoft promises a "cleaner, more personalized, out-of-box experience," specifically pointing to a simpler default taskbar layout. The change is only visible when setting up a new account. When I tested this feature, I noticed one encouraging sign: the handful of games and third-party apps were all stuffed into a single folder on Start, making it possible to unpin that folder and remove its clutter with two clicks.

In that same vein, you'll find some minor changes to the way notifications work, including an X in the upper right corner of every notification allowing you to immediately dismiss it.

The About page gets links to some older utilities that were previously only available from Control Panel. It also gets big Copy buttons beneath the Device Specifications and Windows Specifications sections, making it easier to share that information with a support tech or the corporate help desk. 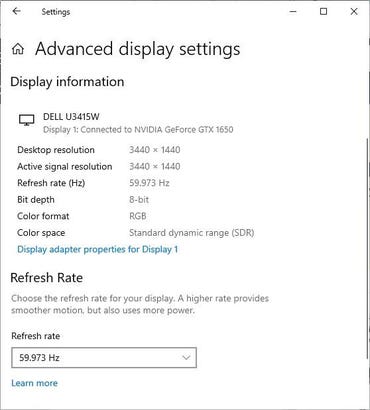 You'll also find a new group of settings under System > Multitasking, where you can decide whether to show individual browser tabs when using the Alt+Tab task switcher. You can choose to show only the primary tab, the three or five most recently visited tabs, or all tabs. (Note that these changes don't affect what you see if you use the Windows key+Tab shortcut to access Timeline.)

On the Advanced Display Settings page, you'll find a new option to change the refresh rate. In previous Windows versions, you needed a third-party utility to make that change.

On 2-in-1 devices, Microsoft has adjusted the way the user interface changes when you detach the screen. You'll no longer see a notification asking if you want to switch into tablet mode; instead, Windows will automatically make that switch, with appropriate adjustments to make the interface more touch-friendly. (You can change this setting if you prefer to be asked every time.)

And that's the full official list. I'll be digging in to this build and will let you know if I find anything else, but on the surface this looks like a modest maintenance release that should have minimal issues compared to the May 2020 Update.