In most industries, automation within the workplace is hidden from consumer view. The average person rarely sees the machine on an assembly line that pieces together their car, or the robots that shuttle their online shopping orders from warehouse shelf to shipping dock. 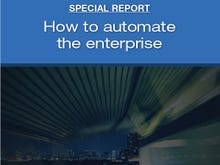 Special Report: How to Automate the Enterprise You can download the full special report as a PDF. It's free to registered ZDNet and TechRepublic members.

In the retail and quick-service restaurant (QSR) sectors, however, automation is often front and center, and very much consumer-facing. This type of automation comes in a variety of form factors -- such as touch screen kiosks, self-checkout terminals, and mobile apps -- but they all work to accomplish similar goals: To augment the customer experience, satisfy consumer demand and boost efficiency in the workplace.

The practice of retail and foodservice automation has been around since the mid-1990s, but it's only in the last decade that it's seen significant maturation in the US. The retail space really led the charge, and today it's not uncommon to find automation technology used for customer loyalty, checkout, gift registry, wayfinding and product lookup.

The QSR sector has evolved more slowly. Fast food chains tested and deployed self-service technology in overseas markets for years, but the trend remained bubbling beneath the surface in the US until 2012, when McDonald's announced it was going to deploy nutritional kiosks at a handful of restaurants.

"When McDonald's does anything, you always expect the rest of the industry to follow," said Alicia Kelso, a restaurant industry consultant and former editor of QSRweb.com.

"We are using technology to power the order rather than customers standing at a counter and going through a list of ingredients," he said.

Similarly, Panera Bread has focused on self-service kiosks through its 2.0 initiative in an effort to simplify the ordering process. Wendy's is also on that path: Earlier this year, the company said self-service ordering kiosks would be available in all restaurants in the second half of 2016.

Apart from customer satisfaction, many QSR technology deployments are also aimed at cutting costs (mostly labor) and boosting sales. In terms of costs, the ongoing minimum wage battle, the Affordable Care Act, the Fair Labor Standards Act and other regulations have prompted low-margin restaurant companies to look toward self-service technology to cut some overhead.

"The $15 per hour wage talks spooked a lot of fast food companies and forced them to look at ways to cut head count and augment labor costs," said Frank Olea, CEO of Los Angeles-based kiosk manufacturer Olea Kiosks. "This technology has been available to restaurants for years, but price was high and labor was cheap. Now it's getting to the spot where brands can see the ROI."

"But right now we haven't seen technology displace a lot of people, it's just giving more options to the consumers," he added.

The technology deployments are also viewed as a way to increase sales. This happens primarily in two ways. First, self-service technology tends to free up staff at the counter to do other things like food prep and sanitation. Self-service kiosks also cut down on wait times and let customers place orders without waiting in long lines.

Kiosks and order automation also give consumers more control over their order, and how they pay for and receive their meal. This is also the case with the integration of applications that allow customers to order via smartphone.

In turn, this drives a better experience and creates a value proposition for customer loyalty.

Second, check averages are consistently higher at a kiosk versus the counter.

"Our data shows that when consumers order themselves, they all order more, which means the average check is higher," said Jon Lawrence, senior director of solutions marketing for NCR. "So, of course, brands like it because they are seeing a lift in sales -- there is a direct business benefit."

Lawrence also pointed out that, prior to the dawn of the iPhone and the smartphone age, consumer adoption was always a roadblock to widespread self-service technology deployments. But now consumer adoption is creating demand, he said.

Overall this makes a strong case for deployments of restaurant automation and self-service technology, but as noted by Kelso, many brands will still hold out "because the restaurant industry is notoriously reluctant to spend big on technology."

"So that's sort of a mixed bag," she said. "There will be more kiosks to appeal to tech-savvy customers and to help restaurants save on higher labor costs. But, we're not going to be losing customer service to machines."

Join Discussion for: Why automation is finally revolutionizing...