Why smart eyewear should look past Spectacles' spectacular failure

The playful Snap Spectacles fared no better than Google Glass. Applications and core components must continue to advance to support the potential of smart eyewear.
Written by Ross Rubin on Nov. 15, 2017 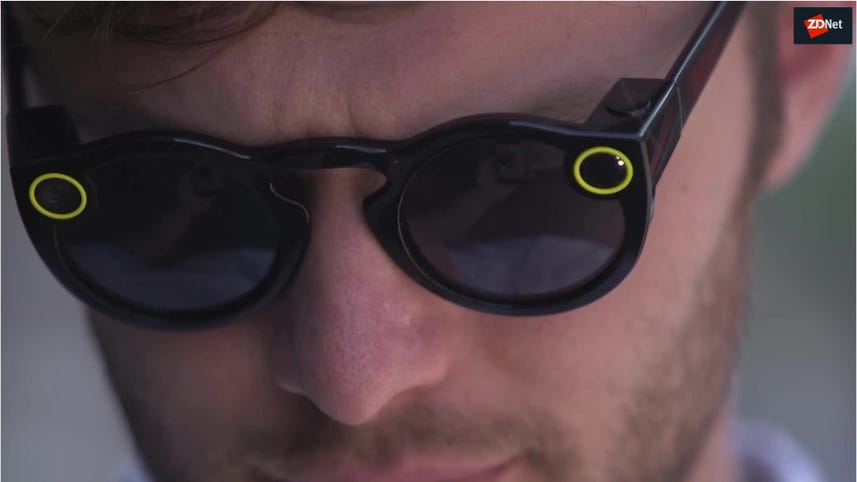 Aside from their alliterative descriptions and initially limited distribution, Google Glass and Snap's Spectacles did not have much in common. The former was a sci-fi-inspired $1,500 monocle designed to project digital overlays onto the real world, accommodating many apps independent of the smartphone. The latter was a cartoonish $129 pair of shades designed to capture video from the real world, tied to a single app and dependent on the smartphone.

Indeed, Spectacles were so different and perceived as so much hipper than Google's pioneering eyewear that they could have been considered the "anti-Glass." Forget about nerdy "explorers." This product was coming from a company with its finger on the pulse of tens of millions of younger consumers, particularly when it came to capturing images and video. Surely, it knew what its audience wanted in a wearable.

It didn't. While Snap excelled at creating buzz around Spectacles by initially limiting its sale via ephemeral vending machines, ultimately broadening distribution did little to raise their profile much. Spectacles was held back by a number of factors limiting its appeal. These included:

Spectacles may have been an understated design compared to Glass, but that didn't mean that Spectacles -- with its bright colors and cameras peeking out from its corners, wasn't a bit of a spectacle itself. Learning from Glass, Snap made sure to notify anyone in Spectacles' view that it was recording video, but the product embodied the smart glasses paradox: Anyone who doesn't need glasses is loath to wear them and those who need them would be unlikely to shell out for a prescription version of the product. Less time wearing Spectacles would translate into less opportunity to use the product, which brings us to a second paradox

As one would expect from a company that cryptically describes itself as a "camera company," Spectacles' sole mission was to capture images and video. In this, it was squeezed between the omnipresent smartphone, a robust enough capture device to have enabled Snap's ascent, and dedicated wearable cameras such as those from GoPro and aspirants. The former, of course, has been the mainstream casual option for spontaneous recording while the latter has been for purposefully capturing what's expected to be compelling video. Unable to win over much usage for either scenario, Spectacles fell into a black hole beyond the salvation of the best low-light sensor: wearable cameras -- a vortex that has sucked in previous products from Looxcie, Autographer and Narrative and inspired a tepid response for Ubiquiti Labs' FrontRow.

Snap may have had more resources than some of the startups -- particularly crowdfunded ones -- that have waded into wearable imaging, but Spectacles always seemed like a vanity project at best and a distraction at worst; its financial results since going public would indicate the latter. Unlike Facebook's headwear dalliances with Oculus, Snap has much more to do to show the long-term viability of its core business. Despite the relatively warm critical response that greeted Spectacles, being in the hardware business seriously requires mastery of many disciplines and logistics for which Snap has been ill prepared.

The failure of Glass and its antithesis Spectacles don't doom the category of smart glasses. Indeed, Glass has already been resurrected as an enterprise product as it taps into the compelling area of augmented reality. Even Apple has tacitly acknowledged that this is a killer app for smart eyewear even if today's technology cannot provide an experience that meets its demands.

And then there are lower stakes efforts such as the Vue that boast a convenience proposition, integrating the functionality of bone-conduction Bluetooth headphones and hands-free headset under the promise of "everyday smart glasses" that are virtually indistinguishable from standard eyewear.

Meanwhile, component suppliers such as microdisplay maker Kopin continue work on brighter and higher resolution displays that could power the next generation of intelligent displays that aim to transport digital content from our pockets to our fingertips to our faces. The applications are evolving quickly, now the technology just has to catch up.

https://www.zdnet.com/article/with-enterprise-edition-glass-finds-its-roi-calling/Glass's vision as an everyday digital overlay onto the real world was overly ambitious, but the Enterprise Edition scales back enough inhibitors to make Glass a competitive AR option.

Are smart glasses about to make a comeback?

https://www.zdnet.com/article/are-smart-glasses-about-to-make-a-comeback/Analysts are forecasting that smart glasses are set to be the fastest-growing type of wearable device.

Snapchat Spectacles could be even less popular than we thought

https://www.cnet.com/news/snapchat-spectacles-apparently-less-popular-than-we-thought/There could be hundreds of thousands of unsold pairs sitting around, a report suggests

By exploiting the new enterprise edition of Google Glass and AR software from Upskill, GE Aviation shows how AR is changing the factory floor.

iPhone
How to use Android's lockdown mode and why you should