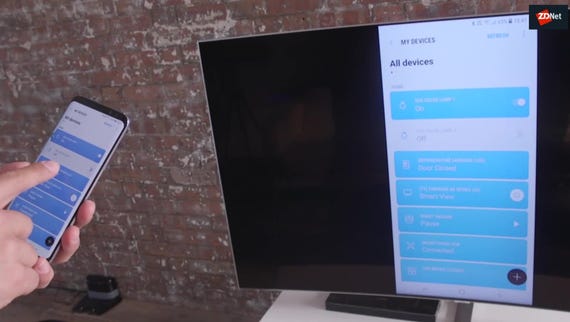 Samsung Electronics is set to unveil details of its new premium QLED TV line-up next month. Among the line-up will likely be its smart TV experience with new AI features led by its virtual assistant Bixby, as teased by the company at last month's CES.

The South Korean tech giant's Internet of Things (IoT) strategy, in which smart TV plays a crucial part, boils down to the following: Offer a smooth experience without taxing the consumer, with a lot of options on where, when, and how to access devices and services. Whether with a remote control, smartphone, or an app, the consumer can start at any of the command points and their IoT will run "seamlessly".

The problem so far has been that these options are disparate and don't integrate well. And many consumers don't like to tap into the full range of options that Samsung offers. So instead of a wealth of devices connected like a spider web, we have individual strands working separately. This is a waste of potential considering Samsung's consumer electronics portfolio: ARTIK IoT modules, smart things, TVs, home appliances, and phones.

Samsung has recognised this and has now put in the effort to integrate its services. Smart View, ARTIK, Samsung Connect, and many more apps are combined in their Smart Things app, "the one ring to rule them all," so to speak. These devices will also be all linked to Samsung Things Cloud.

And then there is Bixby, arguably the most important. The company has been teasing the virtual assistant's arrival to TVs and home appliances since last year, having already deployed it to its smartphones. Nothing is easier for a consumer than using their voice, and with Bixby, steps to access devices are, theoretically, reduced to one. Combined with a smart TV, consumers can monitor and control their entire IoT scheme with the Smart Things app.

Samsung has showcased other new use cases at CES. Voice commands are picked up by the microphone on the smart TV's accompanying One Remote, which can show the inside of the refrigerator, provide an update on the washing machine's status, and check the reels of security cameras in the home. All TV features such as volume control and switching channels can be done through Bixby.

Besides that, Samsung continues its push to make smart TVs a content hub, with the goal to allow consumers the ability to reach the content they want faster. A new Universal Guide has been added, showing OTT, cable, or Netflix options on the one interface. Set-up times for services have been considerably reduced; smartphone music accounts can immediately be sent to the smart TV without another login.

How this is all executed with Bixby is yet to be tested. There will be real challenges; for example, AI needs to become sophisticated enough to discern, contextualize, and analyse audio better. There can be other sound sensing devices, such as the smart speaker -- of which Samsung has one of its own planned for this year -- within a consumer's IoT scheme that can hamper the effectiveness of voice commands.

A Samsung executive told ZDNet that a delay to Bixby's rollout to devices other than the smartphone has been integration, and that the company didn't want Bixby in devices for the sake of it. Bixby has to be catered to individual products, all the while functioning as one platform to control them all.

The ultimate task ahead for Samsung will be not only to make sure the voice assistant runs smoothly, but beyond that integrating it to even more services. Bixby's first integration into smart TV is hardly that, but it's a good start.

Samsung has not limited Bixby to voice alone, calling it an "intelligent interface", and plans to apply smart features to all its home appliance products by 2020. Only when that time comes will we be able to truly judge.

Samsung's Micro LED bet will define its future in TVs

Samsung Electronics is going its own way with Micro LED in TVs, leaving behind OLED. The move will be a true test of the legitimacy of its number one position, and could pay off handsomely if it succeeds.

Samsung Electronics' has unveiled its first 146-inch modular MicroLED TV dubbed the "The Wall" at CES.

Samsung's quest to reinvent the TV in the age of convergence

From QLED, to smart, to curved, Samsung Electronics' experiments in TVs have drawn both praise and ridicule. But are these all leading to a paradigm shift with the South Korean tech behemoth leading the charge?

Learn the products and story lines from CES that will matter for businesses and professionals--and the ones that will have an impact on the rest of 2018.