Intel didn't make a big deal of it at its CES press conference, but the chip giant announced that, with the help its OEM partners, the company will soon release PCs that run both Android and Windows 8.1 at the same time. They weren't  the only ones with dual operating systems. AMD announced that with its partner BlueStacks, it will bring the complete Android experience to Windows- based tablets, 2-in-1s, notebooks and desktops.

This news comes on top of HP and Lenovo's announcements that they'll be releasing out-and-out, pure Android desktops for both home and business users . The day before this Asus released its Transformer Book Duet that runs both Windows 8.1 and Android 4.2.2 . 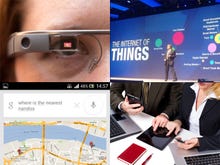 With Intel, AMD, HP, Lenovo, and Asus all throwing their weight behind Android on the desktop, this isn't just a shot in the dark. Serious businesses believe that Android has a real role on the desktop . For that matter, Microsoft—of all companies!—seems to think people will want a dual-boot Android/Windows smartphone .

Intel, however, isn't telling us much about how they'll marry Android and Windows with Dual OS. The one model that currently uses it, the Asus Transformer Book Duet, lets you jump from one operating system to the other with the press of a button.

AMD has been much more forthcoming. "Windows and Android are both mature operating systems, each satisfying the needs of millions of users,” said Steve Belt, AMD's corporate VP of Product Management in a statement. "Users whose devices and preferences span the two ecosystems no longer have to face device-specific restrictions on the benefits of one ecosystem or the other because AMD and BlueStacks have created a seamless user experience between the operating systems. Now users have access to all the apps, games, communications and content consumption they love on their Android mobile devices right at their fingertips, while getting important productivity tasks or high-end PC gaming accomplished on their Windows PC."

BlueStacks does this, not by using a virtual machine (VM) per se, but by running an emulation of Android Dalvik on top of Windows. It can be slow on older systems, but it works well on today's modern hardware.

On its systems, AMD claims that users won't have to run just Android apps on Windows. Instead, they'll be able to use the familiar Android user interface, including settings, configuration and customization controls instead of using Windows 8's Metro. They'll also be able to run Android apps within a window or at full-screen resolution thanks to AMD Radeon graphics processing power.

AMD claims that with people running Windows on desktops and Android on tablets—there's no love for Microsoft's Surface Pro tablets here—the "obvious solution is to eliminate the gap between Windows and Android."

Is there? Really? Intel and AMD clearly agree that people want dual operating systems, but I'm not sure there's really much demand for hybrid operating system PCs. There's Windows 8.1 desktops, of course; Android PCs, sure; Chromebooks, yes, dual Android and Windows devices... I've yet to be convinced.