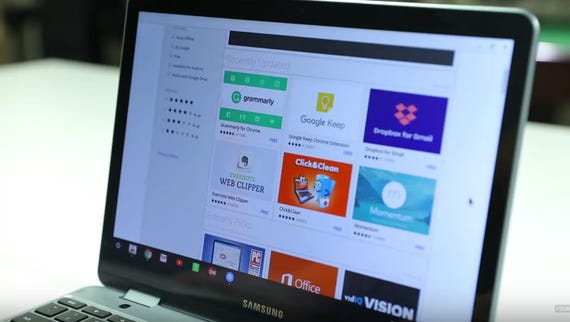 If you need speed, Google thinks Chromebooks are the notebooks to buy in its new ad showing off their "built-in virus protection, a battery that lasts all day, and automatic updates", offering a "new way of doing things" to let you "stream, play, and work without anything slowing you down".

That is, assuming you live in a country or region with cheap and fast broadband, which still matters to some despite some things working just fine offline.

And for good measure the video shows off a blue-screen message, reminding its Windows targets of Microsoft's BSOD past.

The ad, see below, also highlights Chromebooks' gaming credentials, and that you can use Slack, Netflix, Evernote, and photo-editor Lightroom too.

The ad campaign is clearly part of the back-to-school round of promotion that Apple and Microsoft will probably also be launching in a bid to win some of the K-12 education market that cheap Chromebooks dominate in the US.

Given the age of some of the criticisms, the ads seem anachronistic but they're most likely aimed at people who haven't updated laptops in a while, or are annoyed at Apple's apparent ignorance of macOS hardware enough to consider a switch.

Google is also targeting people who've probably never tried a Windows 10 machine, which these days comes with built-in Windows Defender antivirus and has automatic updates, even if some people feel disrupted by them.

The non-LTE version of the 10-inch Surface Go tablets will be available in North America on August 2, suggesting that education is top of mind for Microsoft, with the business market to be dealt with later.

Microsoft's Surface Go tablets will hit shelves starting in early August 2018, and are meant for not just the education market, but also consumers and business users.

Windows PCs gain share in K-12 in the US, but Chromebooks still dominate

Sales of sub-$300 Windows PCs is helping Microsoft grow Windows' share in the US K-12 education market. But, internationally, Chrome OS' and Android's shares are up.

Samsung announces the Chromebook Plus V2, which gains an Intel CPU but lower resolution display.

As Chromebooks gain traction in the enterprise and in schools, here are 10 tips to help professionals get the most out of the machine.

How to set up parental controls on a Chromebook CNET

After a short hiatus, parental controls are coming back to Chrome OS through Google's Family Link platform.