Microsoft is still a way off reaching 10 percent market share for Windows Phone but at least its latest OS, Windows Phone 8.1, now accounts for the bulk of downloads from the Windows Store.

Microsoft is using the figures to encourage developers to update their apps for Windows Phone 8.1 and nudge them towards its vision for converging apps for the desktop and phone to a single Windows Store app platform.

Meanwhile, on the desktop, Windows 8.1 adoption has grown to just under 70 percent as of September, based on downloads from the Windows Store, according to Microsoft. 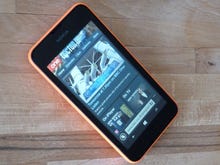 Hands-on with the Lumia 530: Microsoft's cheapest Windows Phone ever

The Lumia 520 was one of the most popular devices ever to run Windows Phone. Can its successor follow in its footsteps?

Of course, downloads from Microsoft's app store could be skewed towards more engaged users of the company's OSes. Windows-focused ad network AdDuplex today reported that in September 39 percent of Windows Phone devices were running 8.1, while 46 percent were on 8.0, and 15 percent are on version 7. Still, it notes that Windows Phone 8.1 usage was up 14 percent over the month.

According to AdDuplex, Nokia represents 95 percent of all Windows Phone devices in use, and while HTC's and Samsung's tiny slices of the Windows Phone market have diminished since August, for the first time there are "meaningful" numbers from new OEMs, with the top two in this class being Prestigio, targeting European consumers, and India's Micromax .

Microsoft also gave a breakdown of markets that dominate app downloads from Windows Store, which is available in 242 markets, and the Windows Phone Store, available in 191 markets.

As with other app stores, Microsoft notes that the in-app purchases were the main source of revenue on Windows Phone between April and August 2014, followed by advertising, and paid-for apps.

Advertising dominates revenues on the Windows Store, however in-app purchasing has grown over the past three months, according to Microsoft, while paid apps revenue is down.

Microsoft is expected to unveil its next major version of Windows, codenamed Threshold, on September 30. While some guess it will be called Windows 9, it's also been tipped to be stripping back the name to just Windows — a name that may also encompass Windows Phone .