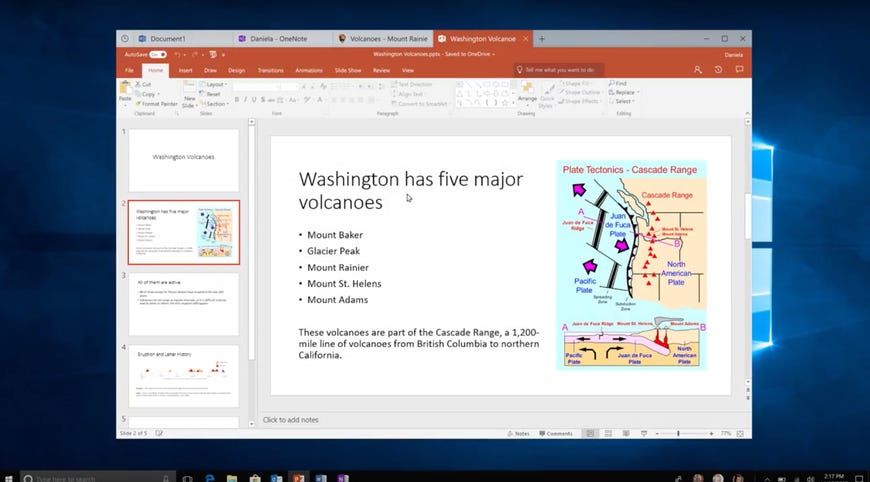 Video: Here's an early look at Sets in Windows 10

Tabbed user interfaces did not originate with browsers. However, ever since they emerged on popular browsers such as Firefox and Chrome, tabbed user interfaces have been associated with web usage and have largely existed in a largely parallel interface world to the windows that dominate the management of apps on desktop user interfaces. Of course, there have been exceptions, such as the well-executed Finder tabs in macOS, but most efforts at getting app-like functionality into browser-like tabs have revolved around beefing up web apps.

https://www.zdnet.com/article/microsoft-windows-10-testers-will-soon-see-timeline-sets-features/Chrome OS is a great example of this, because you can run websites in tabs or their own windows. But Google's addition of Android apps introduced the same interface disparity we take for granted in Windows and macOS: Apps must run in their own windows.

That's about to change soon, though, at least for some users in Microsoft's Windows Insiders Program. When Microsoft first introduced its Timeline feature, which allows users to return to projects on which they were previously working, it seemed like a more useful version of a chronological rollback concept Apple had relegated to backup with Time Machine.

Based on its interest in the feature, however, Microsoft is planning to build on the concept of sets of applications with a feature tentatively called "Sets." Sets simply take the tabbed browser approach but allows you to include the full interface and functionality of Windows apps within the tabs.

Better yet, Sets are machine-independent. Assuming all the apps are available and that your digital stuff resides on OneDrive, you'll be able to recreate your multi-app/website configuration from any PC on which you can log in, even on smartphones to the extent the user interfaces allow. My colleague, Mary Jo Foley, has more on some predecessors to Sets and how Microsoft will roll them out.

I can easily see how I could personally benefit from Sets. In my research work, I am often working with an online survey tool accessed via a website, Excel, and -- depending on the deliverable needs -- PowerPoint, Word, or Google Docs. It would be handy to keep the associated documents and websites close to each other in order to minimize app switching and having to track down the right website from what inevitably grows into a sprawling row of tabs with labels too small to see. (To Microsoft's credit, its Edge browser shows thumbnails of websites when hovering over tabs today.)

Sets do have their downsides, though. As with any tabbed interface, one can't see documents side by side unless you "tear off" a tab into its own window. Microsoft notes that this tends to be more practical for people using larger (e.g., desktop-sized) displays. Indeed, tabs represent an alternative to the "snap" window feature that the company has promoted in the past.

https://www.zdnet.com/article/microsoft-windows-10-redstone-4-test-build-17040-lots-of-fixes-plus-a-few-minor-features/Sets also don't do much per se for keeping communication around a project in focus, although that might be addressed with a mail filter or a tool like Slack or Microsoft's own Teams app. And speaking of Microsoft apps, it's a sure bet that Edge will be the first to implement Sets with other browsers to follow.

In addition, Sets represent yet another way of managing the switching among apps and websites that includes traditional windows, the taskbar, and multiple desktops. Such options are very much in keeping with Microsoft's tradition in offering choice. It could be a boon for users who have mostly grown up living a browser, but it could make training more complicated.

Sets puts aside the blurring between apps and websites that has been tackled by mobile operating systems such as the abandoned Firefox OS and Google's Instant Apps. It lets both be true to their nature but provides recognition that they are often used together for a common purpose. On one hand, Sets are simply another view into the same applications and websites we use today. On another, though, it represents solid, fresh thinking into how the core desktop OS experience should evolve -- something that Microsoft has led in contemplating since Windows 8 and has taken in a more effective direction since the launch of Windows 10.

Windows 10 AirDrop-like Near Share: Microsoft shows off the feature

Microsoft's take on Apple's AirDrop is shaping up nicely.

Microsoft says ASLR behavior in Windows 10 is not a bug

After a prominent security analyst criticized the implementation of a Windows 10 security feature, Microsoft fired back. That behavior is "by design," says Redmond.