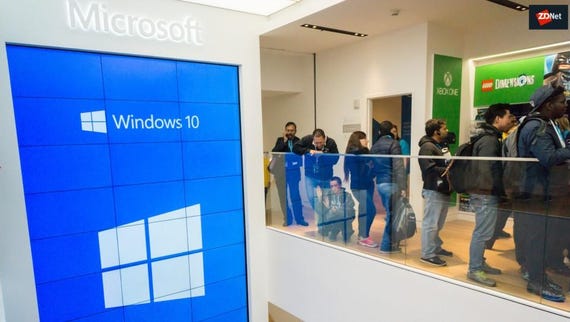 This weekend, I fired up a Windows 10 VM image I hadn't used for a while. Because they are essentially just files, virtual machine images tend to sit around, powered off, unless you need them. I use a standard Windows 10 starter template VM whenever I need a fresh machine. The template hadn't been updated in a while.

As is always the case when re-activating a VM, I ran Windows Update. It made some progress, but then it failed. I tried Windows Update again. I got another fail message.

You can try a bunch of tricks to fix updates when they fail. Fortunately, in my case, the very first tactic I used succeeded. I'll show you that, then I'll share with you some of the additional steps I would have taken if the update still hadn't worked.

I know this should go without saying, but I'm going to say it anyway. Make a backup. Before you go rummaging around in your system's innards, it's always good to make sure you can recover your data.

Yes, I've skipped this step. Yes, it's hurt my soul. Learn from my mistakes. Make a backup. Here are three great articles by our own Windows sensei, Ed Bott, that should help you backup before you go forward.

1. For VM users: Replace with a newer VM

I often have older VMs pre-configured with a lot of custom tweaks, installed applications, and other elements. As such, it's often rather time-consuming to start from a fresh Windows image. But if you're able to, rather than going through the effort to update a version of Windows that was originally installed in 2016 or 2017, start with a fresh Windows image that has the October 2018 update already installed.

In reviewing this post with Ed, he told me that the most common cause of those "Update failed" messages is that there are two updates waiting. If one is a servicing stack update, it has to install first, and the machine has to restart before it can install the next update. Problem solved.

A good read on this is Liam Tung's piece, Windows update problems: Microsoft reveals why recent patches broke some PCs. Even though it talks about some Windows 7 update issues, the underlying principle is the same.

Microsoft actually ships Windows 10 with a Windows Update troubleshooting tool. I find the easiest way to reach it is simply type "troubleshoot" in the search box.

Because I'm working on an older revision of Windows 10, the screen above is shown. If your Windows 10 is from a more recent update, you'll see the following screen, which you can also reach by  going to Settings > Update & Security > Troubleshooting.

After a relatively short time, Windows reported it had found and fixed the problem.

Of course, it's never a good idea to simply take Windows' word for anything like this, so I went back into Windows Update and ran it again.

After a few hours, I had my result. The update that previously failed had completed properly and my system was fully up to date.

If you tell Windows to pause updates, you'll clear all of the downloaded updates. Go ahead and try Windows Update again. Hopefully it will work. This is way easier (and less stressful) than deleting the SoftwareDistribution directory from your Windows directory, which is my next suggestion.

I have to say that this was a surprise. Most of the time, when I've had difficulty getting Windows Update to work, it's taken hours or days, and I've had to jump through a bunch of hoops to get it done.

If the troubleshooter doesn't work, a good first start is to simply clear away the old update files. To do this, first restart your machine in Safe Mode. It is possible to clear the Windows Update files by stopping the Windows Update service, but I've found it's just a much more reliable experience to make sure nothing's running in the background, so I go straight for Safe Mode.

From there, open File Explorer, navigate to the Windows folder, and delete the folder called SoftwareDistribution.

Alternatively, you can type RMDIR /S/Q at a command prompt, which recurses throughout the entire subdirectory and deletes the appropriate update files without requiring additional confirming prompts.

At this point, go ahead and restart your machine and try the update again. If you disabled the Windows Update service, remember to turn it on before attempting your update.

If Windows Update is still failing, you might want to consider going to Microsoft to download the update directly. It's probably not a bad idea to bookmark the Download Windows 10 page on the Microsoft site.

If you're using Edge, you'll be able to download the update:

Go ahead and completely download the update. I'd recommend hitting Save rather than Run, so that you have the update and can reapply it if you run into any snags.

Once it's downloaded, run the update image, and hopefully you'll be all set.

The tactic above may work if there's a recent feature update (as there was in my case). But there are really two kinds of updates: feature and quality/security updates. Ed has a great explanation of the differences in this article. Ed explains that  most "Update failed" messages are related to security/reliability updates.

For those, you have to go to the Microsoft Update Catalog, search using the KB number of the failed update, and download the correct standalone distribution package, then double-click to run it.

If all that fails, it might be time to run the Windows System File Checker. Here's a key tip for those of you familiar with using SFC (System File Checker) in Windows 7 and earlier. Now, since Windows 8, you'll need to run a tool called DISM (Deployment Image Servicing and Management) first.

So let's begin with that. First, open a command shell. Make sure you right-click on the Command menu and run in elevated privilege mode.

DISM is a pretty neat tool with a lot of capabilities

Issue the command DISM /online /cleanup-image /restorehealth. This should help clean corruption among your system components. Give it a few minutes to run. Hopefully you'll have a successful result.

Once you've completed your DISM run, it's time to fire off SFC. In that same elevated privilege command window, go ahead and run SFC /scannow.

As it turned out, SFC did find some errors, which it repaired and then wrote to the CBS (Component Based Servicing) log.

Once you've run DISM and SFC, it's time to reboot. Then, once again, try Windows Update.

9. If all else fails, repair your Windows installation

Hopefully, you're happily updating Windows by now. But if not, I have one more hammer left in my toolbox: repairing your Windows installation itself. Windows offers an in-place repair and upgrade as part of the installation process.

To take this final step, read Ed Bott's quick tip on how to make it happen.

Finally, it's worth mentioning that sometimes Microsoft ships problematic updates. You might just need to skip that update. I know, after all that pain, right? But it happens. Here's an Ed tip on hiding problematic updates and moving on with your life.

Hopefully, one of these procedures is getting you back on the way to an updated Windows. Let me know how things worked out in the TalkBacks below.


Here's everything you need to know before you repair, reinstall, or upgrade Windows 10, including details about activation and product keys.

The venerable Task Manager has a few new tricks.

Here's a selection of our favorite Windows 10 utilities.