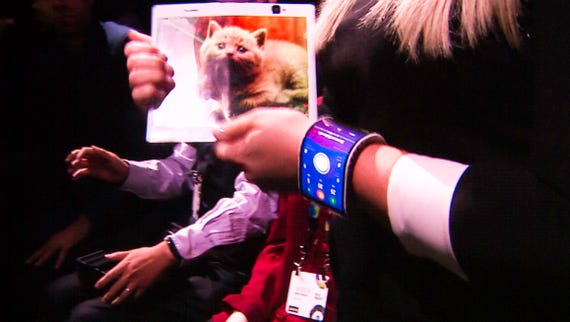 There's been much talk of the race between Samsung and Huawei to release the world's first foldable smartphone. But that title could now go Royole, a little-known mobile company with offices in Fremont, California, Hong Kong, and China's hardware hub, Shenzhen.

Royole took the wraps off its 7.8-inch foldable FlexPai phone-tablet at an event in Beijing on Wednesday.

The device has a flexible area in the middle that allows it to be folded with the rear side facing inwards, converting it into a rather chunky dual-screen phone.

A developer version of the FlexPai is available globally now, while consumers in China can buy the consumer edition today. Royole says it expects to ship the devices in late December.

Royole says it's run the FlexPai through durability tests by folding it over 200,000 times.

In a folded state, the device has a primary and secondary screen that can be used together or independently.

The folded edge also displays notifications, which Royole has put to use for managing calls, messages, and notifications that no longer need to be on the larger screens.

The AMOLED display has 1,920 x 1,440 pixels. It also has fast-charging, a microSD slot, fingerprint reader, and a USB-C port. It's running on an Android 9.0 based Water OS.

As a video of the FlexPai in action shows, there are still some software glitches that need addressing, and the screen has visible fold marks when straightened out that don't look quite as slick as Royole's product shots. As a phone, it's also bulky.

Samsung plans to unveil its foldable tablet at its developer conference in San Francisco next week.

The company is reportedly working with Google on a version of Android that supports foldable devices. Samsung is likely to make a foldable model available to developers first before attempting a release for consumers.

Samsung: Our foldable phone could be unveiled by November, 'It's time to deliver'

Samsung says it is focusing on developing innovations for a foldable smartphone that will be genuinely accepted and liked by consumers. The Galaxy S10 expected early next year also won't be the firm's first 5G phone, he said, while a separate model will.

We also get more hints about its first foldable phone.