Apple on Monday formally announced its latest mobile operating system, iOS 7, and while it looks and feels familiar, its fresh design is enough to inject much needed life in the mobile platform.

The iPhone and iPad software marks about a year's worth of work for the company at an uncertain time following the departure of its key software executive, Scott Forstall, who oversaw the overall design, aesthetic, and functionality of the mobile operating system.

Ive took over Forstall's job, which marked the beginning of a dramatic change for the overall design ethos at the company.

With simpler, flatter home screen icons and a thinner typography for the entire platform, the changes are subtle enough to not alienate existing customers but wide enough to drive updates.

While the new interface is very black and white in a sense, it appeared to have enough color for "depth and vitality," according to Ive. Like OS X Mavericks, which was announced earlier today ,

It also "tracks" your movements in order to respond to the angle of your hands. It offers a 3D-like depth depending on the way you hold the device. The background stays where it is, while the icons appear to "bubble" out.

According to Craig Federighi, whose contributed to the new software — following earlier reports that OS X developers were pulled onto the iOS team in order to hit deadlines — the "best way to appreciate iOS 7 is to see it live."

The iOS software is a favorite among enterprise players. It also includes a range of new features: 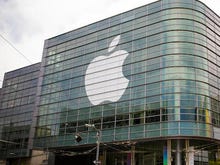 WWDC 2014: By the numbers The iPhone and iPad maker's keynote on Monday included updates on financial figures, sales and shipments, and other numerical nuggets. Here's what you need to know.

Control Center: Swipe up from the bottom of the device and you can change settings, brightness, apps and radio functionality — such as Wi-Fi and Bluetooth.

Multitasking: Support has been added for all apps while still preserving and maintaining good battery life. Apps that are constantly in use over time will develop a pattern which enables background updating and "intelligence scheduling" for when you need them. Apps also adapts to network conditions, and will update in the background before they're opened.

AirDrop: Any apps that currently support sharing, your nearby friends and colleagues will be able to receive files in near proximity. Support for multiple friend selection allows mass sharing within short distances. All transmissions are encrypted.

Camera: New user interface design with live photo filters, à la Instagram. Photos are also organized in a far more efficient manner, such as when and where photos were taken. Photos are now organized into "moments."

Siri: A brand new voice that can be changed on the fly, with a cleaner, simpler user interface in line with the overall design aesthetic of iOS 7. It can also control more of the device, such as playing the last voicemail or switching on radios, like Bluetooth. New services have been added, including Wikipedia, Twitter, and Bing search results.

iOS in the Car: The iPhone software is now integrated with the display in your car, with "eyes free" features. Honda, Mercedes, Nissan, Volvo, Jaguar and others are integrating iOS in the Car in 2014.

App Store: New age-range categories are added to the application store, also the "Popular Near Me" location-based feature that selects the best apps depending on where you are. Background updating has also been included, allowing apps to be upgraded and fixed without manual intervention.

iTunes Radio: Rumored to be called iRadio, the new streaming service will launch as an ad-supported service in the U.S., with other countries coming later. Read more.

Activation lock: When an iOS 7-powered device is lost or stolen and tries to disable Find My iPhone, the smartphone will lock and can only be unlocked with the correct Apple ID credentials. This will alleviate some concerns by lawmakers who have in recent weeks complained that the smartphone industry is not doing enough to prevent smartphone-related crimes.

iOS 7 will be released in fall, when a new iPhone is expected to be announced.