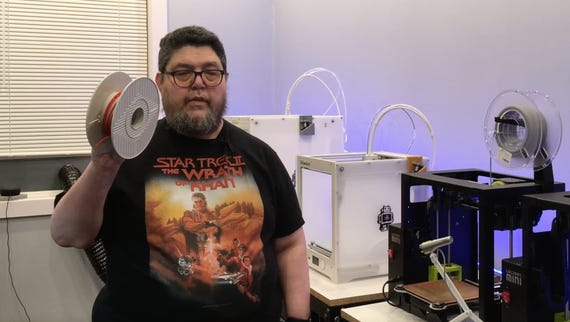 Plastic waste is a big problem in our world today. It's important for makers who use 3D printing technology (which generates plastic objects) to consider the waste hierarchy paradigm.

Here's the thing. Single-use plastics (plastic objects used just once) account for 40% of all plastic produced. It's actually more disturbing than that. Of the 8.3 billion metric tons of plastics produced in the past 50 years or so, National Geographic estimates that 6.3 billion metric tons have become plastic waste. Only 9% has ever been recycled.

This issue has not gone unnoticed in India. Those who revere elephants at the Aranmula Parthasarathy Temple in Kerala, a state on the southwestern Malabar Coast of India, have banned plastics in the temple. This practice of banning plastics at temples has grown. The Travancore Devaswom Board administrative body has now banned plastics at the 1,058 temples it oversees. More powerfully, Indian Prime Minister Narendra Modi announced plans in June to eliminate all single-use plastics in the country of 1.4 billion residents by 2022.

Here, in the US, as well as in the EU, a waste management mantra has been adopted: Reduce, reuse, recycle.

Reduce: Reduce the amount of plastic used. We're seeing plastic pushback in the plastic bag ban adopted by Oregon and other states. The idea of reduce is simple: If we use less plastic, there will be less waste that winds up in the ecosystem. In some ways, 3D printing is actually encouraging reduce, because it can rapidly prototype one or two models at a time. This often replaces full production runs of hundreds or thousands of objects, especially when a design is iterating quickly or a project is for mostly internal use.

Reuse: Reuse asks: How can we reuse objects we would have otherwise discarded? Can we turn that plastic bottle into a planter? Can we turn that filament spool into a cord manager? We'll be looking at an example of reuse via repurposing later in this article and the associated video.

Recycle: What can we do to get that 9% recycling number to increase? The majority of plastics currently produced are based on non-replenishable fossil fuels. If we can recycle plastics, not only can we reduce waste, we can preserve diminishing natural resources. 3D printer enthusiasts have been looking into recycling, with some neat waste-based filament extruder designs that produce new filament from discarded prints. There are also a number of filament companies that now produce filaments from recycled plastic.

Recycle, trade-in, or keep: What to do with old tech gear

You can recycle, you can donate, you can try and get cash back, but first, you've got to decide what to give up.

As we move forward looking at 3D printing and other desktop fabrication technologies that are being incorporated into factories, schools, homes, and IT organizations, we'll keep an eye out for ways to reduce, reuse, and recycle. Here's one such example.

Most filament comes on plastic spools. They take up space and, when the filament is used up, often wind up in the trash. Most folks with 3D printers have a few empty spools just sitting around. I know I did.

A few weeks back, while finishing up a big project, I realized I needed a way to secure the power cord. Rather than custom printing a cord holder, I noticed an empty filament spool sitting on my workbench.

It turns out that filament reels are ideal holders for winding extension cords and storing them away. As the accompanying video shows, I attached one reel to the back of my project, and use another simply to hold an extension cord. They're perfect for this use.

What ways can you think of to reuse filament reels? How else are you reducing, reusing, and recycling plastics? Let us know in the comments below.