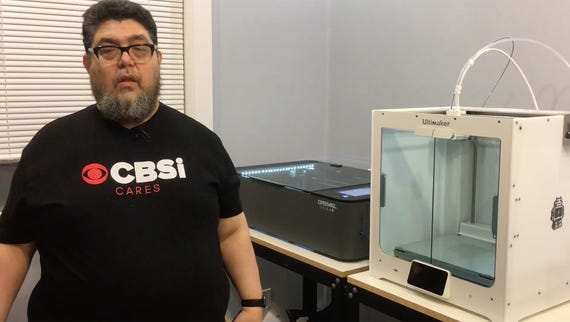 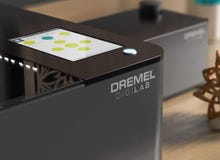 Laser cutter and laser engraver helps grow your business and transform your classroom by turning your vision into reality. Get yours on Amazon.

Welcome back to the DIY-IT Desktop Fabrication Discovery Series here at ZDNet. Today, I'm making some signs from reclaimed wood. But not just any reclaimed wood. When the Dremel Laser Cutter arrived, it came on a shipping pallet. I thought it'd be cool to chop off some slabs of wood from that specific pallet and turn them into personalized signs for my very cool editors at ZDNet.

Also: Getting started with the Dremel Laser Cutter: Before the beam

Laser cutters have two main capabilities: Cutting and engraving. When the Dremel Laser Cutter originally arrived, I was most interested in its cutting capability. Unfortunately, I quickly ran into a limitation: It struggled cutting plywood thicker than 1/8-inch and was not designed to cut anything thicker than 1/4-inch. Despite my best efforts, I was unable to turn the laser cutter into a CNC, which uses spinning steel cutting heads rather than light to do its cutting.

That said, I did make some nice coasters using the Dremel, and there have been other projects where the ability to cut all the way through with laser-like precision is very helpful.

But I wanted to explore what could be done with the engraving function of the laser. In effect, I wanted to turn the laser cutter into laser printer, except instead of using a laser to charge particles on a drum that then get deposited on paper, the laser cutter creates patterns and text by burning into the material it's aimed at.

Wood, leather, some plastics, and paper are primary materials for laser cutters, although many laser cutters can also engrave patterns in some metals and some mineral-based services like marble.

The idea for this project was that it would be cool to cut wood from the pallet the laser cutter shipped on, and then engrave nameplates using that wood as a celebration of the laser cutter's versatility.

My editors have been extremely cool to me this year, so I decided I wanted to make them plaques from that wood, each with the ZDNet logo and their name and title. This turned out to be a lot of fun, and you can watch all the details in the accompanying video.

The process involved a number of wood-preparation steps. First, of course, I had to cut two slabs from the original shipping pallet. I used a battery-powered jigsaw to do this. Next, I had to cut away some nails that remained in the reclaimed wood. Because it provided me good control, I used the bandsaw to chop off those ends.

Next, I needed to remove all the crud the pallet had accumulated from years of heavy use. To do this, I used a random orbit sander with 80-grit sandpaper followed by 120-grit paper. Sanding isn't fun, but it was incredibly satisfying seeing really pretty wood reveal itself from under layers of shipping dirt. I used protective gear and dust collection, so I didn't have to breathe in that dirt.

It was at this point I realized the slabs were two different types of wood. The grains were completely different. According to Nelson Company, a maker of pallets in the US, most pallets are constructed from oak and southern pine. I think Larry Dignan's sign was oak, and David Grober's was southern pine. In the accompanying video, I put both signs under the microscope, and you can see how different the burn patterns look from the two different types of wood.

There were two more prep steps. First, I squared off the ends of the slabs and matched them in size using a miter saw with a stop block. Then, I took a router (the woodworking tool, not the networking box) to round over the edges, which eliminated the ugly, chipped rough edges and gave the plaques a finished look.

At this point, it was ready for engraving. I created a series of PDF files with my designs that I uploaded to the printer. See the attached video for a full walkthrough of that process. Once the designs were in the printer, I placed in each slab and engraved the plaques. Each plaque took about 15 minutes to "print."

Finally, I gave each plaque two coats of polyurethane finish, sanding between coats. After letting the plaques dry for a few days, they're ready to send to Larry and David.

One of the most common applications for laser cutters is signs. You can get plastic that has different colors laminated together, which lets you create multi-colored signs. You can create signs for offices, desks, and other productions. My laser cutter (like most desktop units) has a working area of about one foot by two feet so that you can create reasonably large signs.

It's a lot less work to use pre-cut wood designed for laser cutting. But I have to say that it's been really rewarding to be able to take old wood and give it new life -- especially when it was the wood that originally carried the laser cutter to me.

Have you done any interesting projects with a laser cutter? Let me know in the comments below.