It is well on the way to hitting the 40,000km milestone of being able to circle the planet at the equator.
Written by Chris Duckett on April 2, 2019 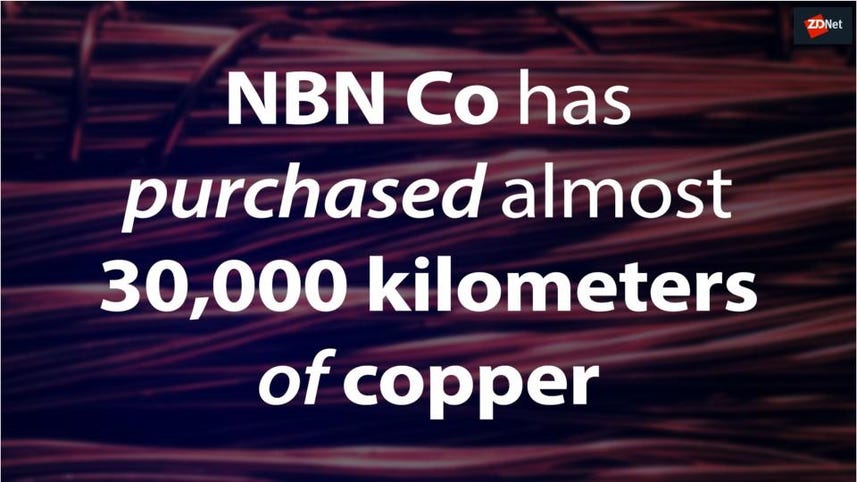 The company responsible for deploying Australia's National Broadband Network (NBN) has almost doubled the total amount of copper it has purchased since October 22, 2017.

"As at 19 February 2019, NBN Co has purchased 29,460km of copper cable, which has typically been used for the link between existing pillars and new nodes.", the company said in response to a Senate Estimates Questions on Notice published this week.

"A significant proportion of this figure is also due to FTTC network construction for short extensions of copper lead-in cables to the FTTC DPU location."

NBN had previously disclosed that it had bought 16,600 kilometres of copper almost eighteen months ago.

The company also revealed that less than half of the premises in its fixed wireless areas had taken up such services, and fibre-to-the-node (FttN) uptake was tracking lower than the company needed to meet its financial goals.

"In Fixed Wireless areas, which have been [ready for service] for 18 months or more, the percentage of premises with at least one active service is 45.18 per cent," the NBN said.

Despite the low uptake, the technology has still suffered from congestion.

At the start of the year, the NBN had given itself until September to have less than 1 percent of its fixed wireless towers suffer from congestion.

The company defined congestion as being a 30-day average busy hour throughput of under 6Mbps.

By the middle of the year, the NBN said it would be set to offer a best-effort fixed wireless service that it claimed would offer 60/20Mbps in non-busy periods. It also has plans to drop its top-tier 25-50/5-20 Mbps plan by the end of 2019.

In another question answered this week, NBN said it needed a take up rate of 73 to 75 percent to meet its financial targets, however in areas where FttN has been available and the old copper network is switched off, the uptake up rate has sat at 72 percent.

"A missed appointment refers to where a technician did not attend the premises within the agreed appointment window, as per the service level schedule," the company said.

In many of these cases, the technician turned up earlier or later than the stipulated time but completed the job on the day. The number also included some cases where the end-user was not in attendance or where bad weather restricted the ability to complete the job.

In the Australian federal budget delivered last night, the Regional Broadband Scheme charge that helped fund NBN's loss-making satellite and fixed wireless services was slated to be cut from AU$10 a month to AU$7.10 and be indexed with inflation.

However, it is not clear how much of the Budget will be enacted, as the government is expected to call a May election this weekend.

In its most recent set of financials, NBN reported its half-year revenue had hit AU$1.3 billion, and announced a 65 percent improvement in earnings before interest, tax, depreciation, and amortisation, up from the negative AU$1.4 billion reported this time last year to negative AU$477 million.

Earlier this year, retailer Vocus said the variable nature of the CVC pricing model used by NBN was incompatible with the fixed rates paid by consumers and that the economics did not stack up.

Vocus said NBN pricing was "simply too high", and it was cashflow negative after providing modems and backhaul.

Consequently, the company said it would focus on selling NBN only where viable and shifting towards fixed wireless and mobile solutions. Vocus pointed to non-NBN services being simpler with lower operating costs and 5G creating a path for business applications as reasons for the switch.

The subsidy charge to help fund the NBN's loss-making satellite and fixed-wireless regional networks has been reduced from AU$10 to AU$7.10 a month.

The government will fund two more mobile blackspots rounds with AU$160 million, and a Regional Connectivity Program with AU$60 million.

NBN partners with Cisco for business solutions and compensation

The two will combine on business solutions across connectivity, security, collaboration, and productivity, as well as a marketing campaign and a rebate program.

NBN is complex and economically unattractive, and retail will shift towards fixed wireless and mobile, the company has said.