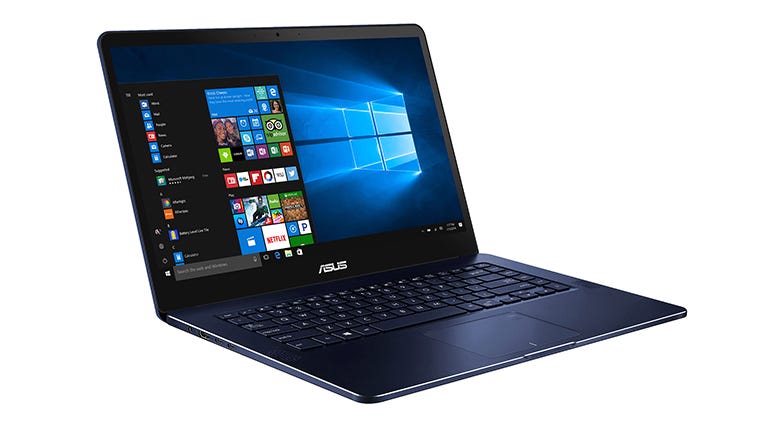 The updated ZenBook Pro from Asus may not have the bells and whistles of high-end rivals such as Apple's recently updated MacBook Pro, but it can match its Apple rival for professional-level performance and portability, while also coming in at a far more competitive price.

The ZenBook Pro UX550's design is fairly nondescript, simply sporting a glossy blue or black casing, complete with a rather old-fashioned black plastic border running around the edges of the 15.6-inch display. It feels pretty sturdy, though, and the large display means that there's plenty of room for a spacious, comfortable keyboard and trackpad.

Despite the size of the screen, the ZenBook Pro is still very portable. It's a little thicker than the 15-inch MacBook Pro (19mm compared to 15.5mm), but the two laptops are the same weight at 1.8kg, so the ZenBook Pro will be a good option if you need a powerful laptop that's still light enough to take on the road.

The only disappointment here is that the current models only provide full HD (1,920x1,080) displays. To be fair, the display on our review unit was bright and colourful, and will be more than adequate for presentations, video streaming, and simple photo- or video-editing. However, the graphics performance offered by the ZenBook Pro seems rather wasted on a mere HD display, since it's clearly capable of running professional video and graphics software that would benefit from a higher-resolution display.

Asus tells us that a 4k model is due soon, although no pricing or release date have been announced so it might be worth waiting a little longer to see the full lineup for the new range. (You might see ZenBook Pro models advertised online with 4k displays, but those are from last year's UX501 range, and have older CPU and GPU configurations.)

We can't fault the ZenBook Pro's raw performance, though. Its 2.8GHz processor produces Geekbench 4 scores of 4,410 and 13,376 for single- and multi-core performance respectively, which are only fractionally behind the 2.9GHz Core i7 processor in the more expensive mid-range MacBook Pro. However, the ZenBook pulls right ahead in graphics performance, hitting 95.8fps with the Cinebench R15 OpenGL test, compared to 85fps for the MacBook Pro. It runs cool and quiet too, with two internal cooling fans producing just a barely noticeable hum during the intensive Cinebench tests.

The ZenBook Pro's competitive price does involve some compromises, though - most notably in its solid-state drive, which only delivers relatively modest write and read speeds of 411MB/s and 523MB/s. That's still about three times faster than a conventional hard drive, but we've tested several laptops recently that provide stronger SSD performance.

And, as we saw with the recent ZenBook Flip S, Asus tends to get a little carried away with its claims for battery life. The company quotes up to 10 hours for (non-streaming) video playback, and 14 hours for running general productivity software such as Microsoft Office. But, in our battery tests, the ZenBook Pro only just managed to reach 6.5 hours when streaming video over wi-fi -- even with the display brightness turned down to 50 percent and using the Core i7's integrated GPU rather than the more demanding discrete Nvidia GeForce GTX 1050. But, to be fair, that's just about acceptable for a high-end laptop such as this, and you should still be able to squeeze a full day's work out of the ZenBook Pro if you're careful with wi-fi usage.

The new ZenBook Pro is certainly good value for money, providing professional-level performance at a competitive mid-range price. And while the laptop isn't particularly stylish, Asus has done well to squeeze high-end performance into a slimline, 15.6-inch design that weighs just 1.8kg. Asus is, perhaps, missing an opportunity by not currently providing a higher-resolution display for the ZenBook Pro, since there are many designers and photographers who might balk at Apple's high prices and switch loyalties if only this laptop had a better display.

There's room for improvement with battery life too, but the ZenBook Pro should still appeal to many business users who simply want a fast, powerful laptop that can act as a desktop-replacement system both in the office and on the road.