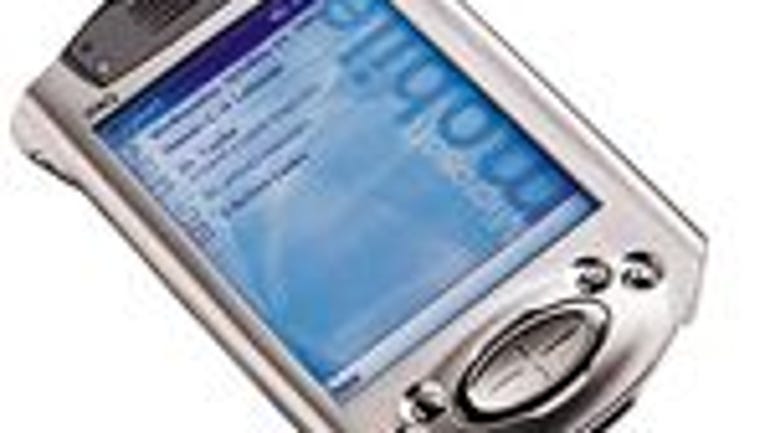 Compaq's iPAQ H3870 has the unique distinction of being the first handheld to offer built-in Bluetooth connectivity. The jury is still out on whether this technology, which allows devices to communicate wirelessly over short distances, will catch on. But if you're trying to decide between this £529 (ex. VAT) model and the virtually identical iPAQ H3850, the H3870 costs just £60 more, which is not an unreasonable price to pay for having Bluetooth on-board -- just in case the revolution ever gets underway.

The Bluetooth radio is hidden in the black plastic protrusion above the reflective TFT display, where you'll also find the infrared port, the SD card slot and the built-in speaker. Bluetooth is designed to allow gadgets such as handhelds, cellphones and printers to exchange data wirelessly within a 10-metre range. A blinking blue light atop the H3870 tells you that the radio is on. Once the radio is active, you can connect with other Bluetooth devices such as Ericsson's T68 cellphone or HP's DeskJet 995C printer.

The various control panels and wizards for the Bluetooth radio are only barely understandable and will likely leave technically inexperienced users exasperated if they have to troubleshoot a problem. When we connected to another Pocket PC 2002 device armed with a Socket Bluetooth card, we learned that we couldn't expect Bluetooth products from different manufacturers to offer the same features. For instance, the iPAQ 3870 can exchange files and contacts via Bluetooth -- something that the Socket card doesn't support. Conversely, the Socket card allowed us to dial a cellphone simply by tapping a name in the handheld's contact list, a trick that we couldn't pull off with the iPAQ. However, third-party dialler software is available for download that will allow you to do this with the H3870.

In all other respects, the iPAQ H3870 is identical to the H3850. They share the same aluminium case, Pocket PC 2002 operating system, 206MHz Intel StrongARM processor, 64MB of RAM, 32MB of ROM and 65,536-colour reflective TFT screen. If you already own CompactFlash, PC Card and double PC Card sleeves for an older iPAQ, they'll work with the H3870. This model also comes with a protective screen-cover sleeve and a bundle of extra third-party applications, such as the Insignia Java Virtual Machine and data-encryption software. Also included is a File Store application that allows you to put up to 6MB of your most critical documents in ROM. If you ever drain the iPAQ's batteries completely or hard-reset your handheld, the data stored in ROM won't be lost.

Compaq has managed to augment the rechargeable battery's capacity in the H3870 without increasing the battery's dimensions. The company claims that you can get 10 hours of battery life, but that's with the backlight turned off. We got around five hours with the device set on medium brightness and the Bluetooth radio deactivated. This amounts to about an hour more than we coaxed out of the H3600-series handhelds that we've tested. With the Bluetooth radio active, however, we lost that one-hour gain.

Like the H3850, this iPAQ lacks a dedicated power port. To recharge your handheld on the road, you now need to attach a little dongle onto the end of the power cord to adapt it to the port on the device. Be careful not to lose it.

When comparing a H3850 to the H3870, it's easy to quantify what the extra £60 buys you -- Bluetooth support. Is that alone worth the extra money? Well, if you love the iPAQ design and want to access wireless data via a Bluetooth phone or share files with other handhelds, then the H3870 is an attractive choice. Another option is to choose Toshiba's e570 and add a Socket Bluetooth CompactFlash card. That package may cost you a few pounds more, but the Toshiba product arguably has the edge in design terms.